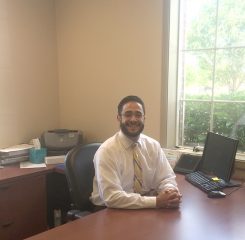 Joseph Fathalla, president of the Kiwanis club in Westfield, wants to make every second of the community’s time count.

Kiwanis International is a service organization in which Fathalla said he believes is a great benefit to local and global communities.

“I would describe the organization as an opportunity to help serve the children of not only the community but also of the world, and allow for those individuals to understand their true value as humans on this earth to make a difference in a positive way,” he said.

Fathalla had been involved in serving the community in the past, so when previous Kiwanis International President Don Canaday approached Fathalla asking if he would like to join a new Kiwanis club in Westfield, Fathalla jumped at the chance.

“I was more than ecstatic to accept the opportunity to become a member,” he said.

The group has been operating for several months and plans to extend its reach throughout this year through various events. Fathalla said the Kiwanis also hope to coordinate with local high school Key Clubs, a junior division of Kiwanis, sometime in the future.

On July 4, the Westfield Kiwanis Club will set up a tent space at Grand Park to build awareness for Kiwanis involvement in the city and to develop outreach to area youth. On Sept. 15, the Kiwanis will hold a silent auction benefitting the Westfield community.

The club meets at 5:30 p.m. every first and third Tuesday at the Westfield Washington Public Library, 333 W. Hoover St. Meetings are open for anyone in Westfield to join.

“We definitely want to branch out and build in any way possible,” Fathalla said. “I believe that if we’re able to make the most of the time and energy that we have right now, today, for the benefit of our future generations, then there can be a better tomorrow.”

As someone who believes that time is the most valuable currency there is, Fathalla said he thinks Kiwanis will continue to benefit the Westfield community and its youth.

The Kiwanis club can be reached at its email kiwaniswestfield@gmail.com and on Facebook.