You are at:Home»Current in Carmel»Carmel Community»Fantasy novelist Sydney Scrogham moves to Carmel for new ‘adventure’ 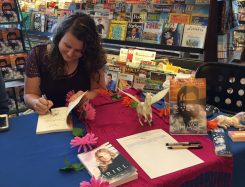 Author Sydney Scrogham moved to Carmel “for an adventure,” she said.

In June she packed her bags, left her home state of Virginia, and ended up in downtown Carmel.

One of her first impressions was that the city is full of opportunities.

“I’ve been staring in awe at all the events going on,” she said.

Already, Scrogham has connected with a local writers’ group that meets weekly and found a passion for Indy Reads.

“I love giving back to younger kids,” she said.

Scrogham has published two books: “Chase” through Koehler Books and “Ariel: the First Guardian,” which is self-published. She focuses on writing fantasy and romance novels in the new adult genre, which targets college-aged young adults. She is working on a prequel to “Chase,” and she has plans for further books in the series.

“My goal is to get at least five books out,” she said.

When she isn’t writing, Scrogham works as a receptionist and takes care of her horse, Snowdy, who is still in Virginia recovering from an injury. Her horses inspire and appear in her books, as she features magical creatures called “alicorns,” a combination of a Pegasus and unicorn. Scrogham said she cannot wait for the day Snowdy can be moved to Carmel, but at the same time, she said she is excited about her new life here.

“My brain was really bored, and I knew if I was going to inspire my creativity I needed to do something really different. So I moved,” she said.

Scrogham said she is toying with the idea of having one of her books take place in Indianapolis, a setting not often used, she said.

“I’m just excited to see where it goes,” she said.