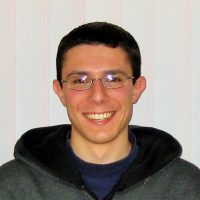 The 26-year-old was encouraged by some aviation mentors to apply for the IEA job posting.

“I had the opportunity to do research as part of a research study, and I was able to work out here at the Indianapolis Executive Airport for six months (while a student at Purdue) and record data,” Cozza said “I was familiar with the airport, and it has a lot of great potential. The communities on the north side are just exploding in growth.”

Since Cozza is the airport’s first full-time employee, he said he and the Airport Authority are still defining his role.

“There’s a big learning curve ahead for all of us as we create the position. There’s a bit of unknown and uncertainty, and we will do our best to minimize that,” Cozza said.

Cozza officially began his new role July 5. Some of his duties include overseeing daily operations and maintenance, infrastructure development and marketing initiatives with the airport.

“Brad has a strong academic and experiential background in airport management as well as an exemplary record of community involvement. These are qualities that the board was seeking in an airport director,” stated Bill Frye, president of the Airport Authority. “With a dedicated airport director, Indianapolis Executive Airport can continue its excellent record of superior service to the aviation community and focus on further growth opportunities for the airport that will bring additional jobs to the area.”