You are at:Home»Current in Carmel»Carmel Community»Carmel’s Marvin Bittinger combines love of math, writing 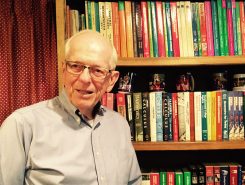 Marvin Bittinger in his library full of his math textbooks. (Photo by Mark Ambrogi)

Marvin Bittinger has always been able to combine his passions in his writing.

“Always through my writing, it’s been a lust, a thing that I had to get it out, something I was driven to do,” Bittinger said. “I would write into the weekends. Even on Christmas Day, the kids would be playing with their presents and I would be back in there writing, because I loved it so much.”

“Some of that is padded because with a textbook you revise it every four years,” said Bittinger, who has lived in Carmel with his wife, Elaine, for more than 40 years. “I’ve probably written 50 (before revisions), and I’ve had co-authors. I took a lot of pride in the accuracy of the books.”

“I just ran out of gas, I guess,” Bittinger said.

But he hasn’t ruled out writing again if something interests him.

Since receiving his doctorate in math education at Purdue in 1968, Bittinger began teaching at IUPUI. He mostly stopped teaching in the mid-1980s to concentrate on his textbooks. He is listed as an honorary professor emeritus of mathematics education at IUPUI.

“When you do one (textbook), it’s why don’t you do one of these,” Bittinger said. “It’s sort of like a snowball. All of sudden, it’s too tough to teach.”

“I had a heart attack in 1998. It made me more passionate about my faith and study more of the Bible,” Bittinger said.

In addition to being a baseball fan, Bittinger was an avid bowler. He carried a Professional Bowlers Association card and once averaged 206 in a league season. The Bittingers have two sons, Lowell, 46, who lives in Fishers, and Chris, 42, a Carmel resident. Lowell also had a PBA card.