You are at:Home»Current in Carmel»Obituary: John Frederick “Fred” Williams 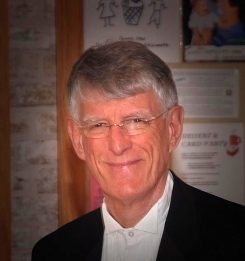 John Frederick “Fred” Williams, 73, of Carmel, passed away peacefully on June 28 at his home, surrounded by his loving family. He was born Sept. 23, 1942, in Ayer, Mass., to the late John Clifford and Betty Louise Frederick Williams. He graduated from Canfield High School in Canfield, Ohio, where he played tennis, football and basketball. He went on to study at Case Western Reserve before graduating from Youngstown State, where he was a member of the Theta Chi fraternity. Fred also completed graduate work at The Ohio State University. He spent his summers at Camp Fitch in Erie, Penn., where he worked as a counselor and later as a village director. He married Bonnie Knott, his high school sweetheart and the love of his life on Sept. 25, 1965.

Fred started his career with IBM in Dayton, Ohio. The majority of his career was spent at Anacomp in Carmel, where he served as vice president. His entrepreneurial spirit led him to become a founder of Digital Technology, Inc.

Fred enjoyed being active and had a love for the outdoors. His interests included tennis, squash, basketball, ping pong, snow skiing, yard work, reading and traveling. Fred even let his girls talk him into getting his scuba certification with them so they could dive together.

In lieu of flowers, memorial contributions may be made to the J. Fred Williams Memorial Fund, care of Jackson Stewart, Chase Bank, 200 East Carmel Drive, Carmel, IN, 46032. An endowment will be established at Camp Fitch in Fred’s name to provide scholarships for underprivileged children to attend camp. Online condolences may be shared by visiting www.flannerbuchanan.com.