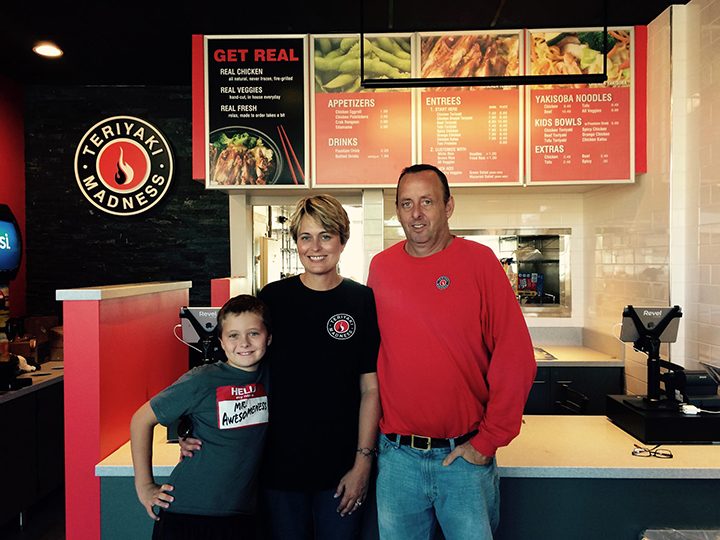 From left: John, Janna and Trevor Sweeney in front of their Teriyaki Madness counter. (Submitted photo)

Trevor Sweeney has spent most of his career as a boat pilot, including 11 years working as a riverboat captain at Belterra Casino in Switzerland County in Indiana.

Sweeney, a 50-year-old Navy veteran and Merchant Marine, also worked as a boat pilot for steel mills. However, he was ready for a career change and he and his wife, Janna, decided to buy a Teriyaki Madness franchise.

The fast-casual, Asian grill is scheduled to open Aug. 25 at 12525 Old Meridian St., Suite 140, Carmel. It’s the second in the Indianapolis area, after another franchise owner opened one at Keystone at the Crossing in January.

“This is kind of a dream of his (to open a restaurant),” Janna said. “I was waiting until my other youngest child graduated high school (in 2015). That’s when we started the process.”

The couple, who have an 8-year-old son, John, are living in a Carmel apartment while waiting to sell their house in Vevay, Ind.

“We met a franchise consultant and figured out our strengths and weaknesses, and this was one of the options,” Sweeney said. “The food is excellent. What I like about Teriyaki Madness is it’s an alternative to so many pizza places, burger places and sub shops. It’s a good, healthy alternative to all those. All our sauces are made in-house. All our produce is never frozen.”

The restaurant will have seating for 12 inside and eight outside.

“The food is not sitting around waiting,” Sweeney said. “It’s cooked on the spot. We’re shooting for seven to eight minutes. When we get slammed, it’s going to be a little more time. It’s a very simple menu board.”

Janna, who was a dental hygienist for 26 years, is helping with the training and supervising aspects of the business.