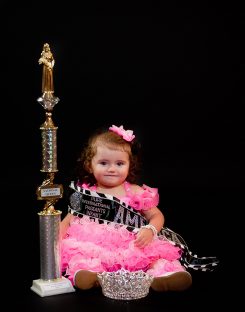 Delani Ann Gutterman of Zionsville sits next to her trophy. (Submitted photo)

“There were different fashion shows to participate in for fun,” Kwiecinski said. “There was a superhero night and a wacky tacky fashion show, where people had dressed up in their crazy outfits and walked the runway. They had a Royal Ball at the end.”

Kwiecinski said Delani was on stage for two different days, one was for beauty and formal wear and the second day was fashion modeling where Delani wore a dress with a military print.

“She did it to honor her dad, who is in the (National Guard),” Kwiecinski said.

“Generally, the comments we’ve gotten have been about her personality and that she likes being in her dresses,” Kwiecinski said.

As part of her prize, Delani received a free photo shoot the day after her victory.

Kwiecinski said Delani will return to the pageant in June 2017 to crown the next Infant Miss America winner.

“We’ll do the pageants until she tells us no,” said Kwiecinski, adding Delani has entered a few other pageants in the Indianapolis area.

“Now, we have to do 10 community service projects throughout the year of her reign,” Kwiecinski said. “We are collecting pop tabs and travel-size shampoos for Ronald McDonald House at Riley (Hospital for Children). We’re hoping to make a couple appearances at local festivals.”