Racecar driver Pippa Mann shared her views on the lack of women in technology at a seminar hosted by Zionsville-based Clear Software July 28 at zWORKS. 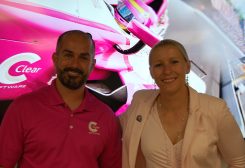 “Obviously in my industry, we also have a small issue of gender gap,” Mann noted, as the only female driver in this year’s running of the Indianapolis 500.

Before an audience of more than 50, Mann explained the ways that technology is used in automobile racing, starting with the design of the cars to checking water and oil pressure, gear shifting and acceleration.

Mann shared graphs that are used to identify when she brakes her vehicle during a lap, illustrating the importance of technology in racing.

“We need people to run that technology,” she said.

Along with the lack of female drivers, Mann said there was only one top, female engineer involved in this year’s Indy 500.

In 2015, women represented 25 percent of professional computing occupations in the U.S., according to the Bureau of Labor Statistics. To solve the gap, attendees were encouraged to participate in support networks, actively combat biases and encourage young girls to embrace technology.

Clear Software became a sponsor of Mann’s racecar when CEO Jon Gilman met her at a Speedway event in May and was impressed that she simultaneously promotes Susan G. Komen with her pink and white car.

“She was the only racer racing for a cause, which I think is socially conscious,” Gilman said.

Gilman said that he plans to host a series of events covering other gaps in technology, including racial and ethnic. He started the series to stand up for groups that are often oppressed in the industry.

“We want to bring more light to those issues,” he said.