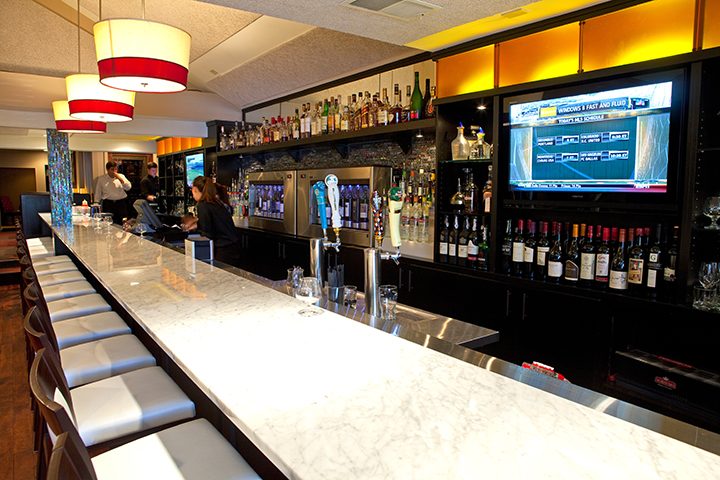 An example of Matt’s Wine Bar in the Columbus, Ohio, restaurant. (Submitted photo)

“The decision was made from the lack of sales performance for Langton’s,” said Rob Hoersdig, director of operations for CLB Restaurants. “We have had a great run with Matt the Miller’s since we have been in Carmel, and we know that brand is very strong here. We have great financial success in it. We have had to turn away parties of 40 and more since opening, so we know there’s an opportunity to do that.”

Alongside the party space, Matt the Miller’s will be implementing Matt’s Wine Bar to be located on the second floor of the building previously occupied by Langton’s. The wine bar will feature the Enoline Wine System, providing 2-, 4- and 6-ounce pours of wine not typically available by the glass. It is expected that, in addition to the Matt the Miller’s menu, Matt’s Wine Bar also will feature small cheese and charcuterie plates.

“We certainly hope to have that finished in time for the holiday season, we like to think we will wrap this up late October,” Hoersdig said. “This is more of a renovation and not construction. The only level of construction is to open up the wall connecting the two spaces, which connects very naturally, and we will change the lower level to match Matt the Miller’s. We run the same (wine bar) in the Columbus, Ohio, restaurant (Tucci’s), and we have had an awful lot of success with it, and we are excited to bring it to Carmel.”

Langton’s opened last year, and previously this summer it revamped its menu to include more specials and American fare to appeal to the customers from Carmel. Any gift certificates and coupons guests have for Langton’s will be accepted at Matt the Miller’s. Matt the Miller’s will be contacting parties previously booked at Langton’s to coordinate an alternative.