You are at:Home»Current in Geist»Lawrence Common Council approves raise for city’s EMS workers 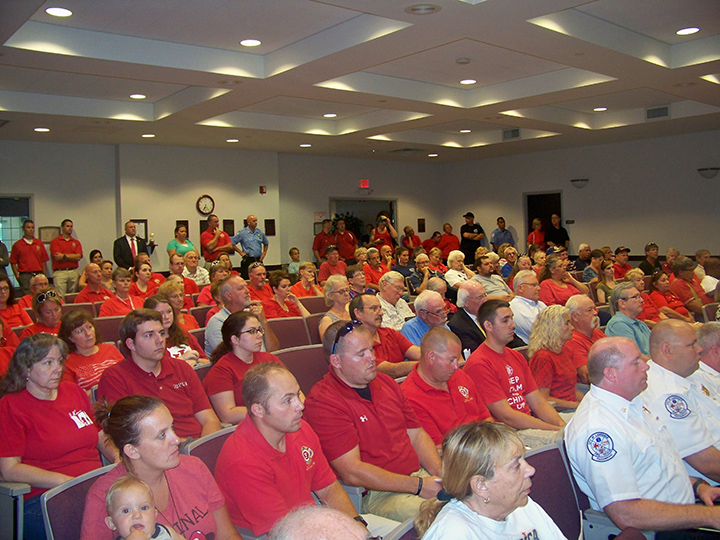 After multiple meetings of discussion and debate, the Lawrence Common Council unanimously approved a pay raise for the city’s emergency medical services staff at its first meeting of the month Aug. 1.

Beginning with the next pay period, Lawrence paramedics and EMTs will receive a $2 per hour raise.

“I have been committed to a long-term solution, but have been reluctant to provide raises in the middle of the year, so I sponsored Proposal 13 as a long-term solution to retain emergency medical personnel for the City of Lawrence,” Councilor Tyrell Giles said. “(Proposal) 13 added a $4 increase to the salary range. Within that $4 range, it happens immediately, but the controller and city has the ability to impose what they deem appropriate — which the controller and the chief has deemed right now $2.”

Lawrence Mayor Steve Collier, Fire Chief Dino Batalis and Controller Jason Fenwick, plus a large crowd in attendance in support of the city’s EMS staff, were glad to see the measure approved.

“I’m thrilled to death that we’re moving forward,” Batalis said. “These paramedics and EMTs deserve the increase and I feel like it’s a huge achievement. I believe it was us all working together. … It’s not going to be an overnight fix, but I’m telling you I’m very positive we’ll be able to correct this situation over a short period of time. We’ll be able to retain some of the people we have, they’re great employees, and attract other ones because it does get us a little bit higher on the playing field.”

While EMS staff will receive a $2 raise now, the potential is there it increase wages another $2 per hour on top of the original raise should the city and fire department find funds for that.

“Obviously we want to be able to do more when we can do more, but that will be dependent upon the ability to sustain that going forward,” Fenwick said. “Right now, $2 was something I feel very confidently would be sustainable.”