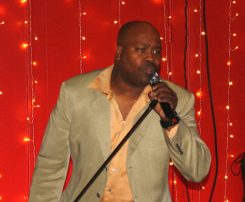 Frank Smith calls himself and the singers of the Karaoke Ninja Outlaw Warriors a bunch of show-offs.

“We are a bunch of show-offs, and we love to sing,” the 44-year-old Indianapolis resident said. “I wanted to bring K.N.O to a place where it’s not inside … like an actual concert feel.”

K.N.O Warriors will perform 6 to 10 p.m. Aug. 12 at the Center Green, between the Tarkington and the Palladium.

“It’s the first of its kind in Carmel that I’m aware of,” Smith said of the concert. “Back in 2014, I did a show on Monument Circle to see if I could pull something like this off. I needed a better venue with better parking and get more people out in front of karaoke to see it for what it is. It is definitely entertainment, but a lot of people think it’s sad, country love songs and bad singing, but the people singing in this concert are some of the best in the state.”

Although the members of K.N.O Warriors will be performing for the public to attend and listen, there is a chance for audience members to sing karaoke as well.

“I’m bringing all the equipment, all (the public has) to do is perform,” he said. “(The public) is getting a free concert with some locals, and it’s going to sound amazing.”

Smith hired his own clean-up crew for the event, and those in attendance are welcome to bring chairs and coolers. Alcohol will not be permitted.

Smith plans to make this an annual event. He began competing in karaoke contests in 2004, and he was deemed state champion karaoke singer in 2007 and 2008. K.N.O Warriors was created in 2012.