You are at:Home»Current in Zionsville»Arrow to the heart: Making, missing 1984 Olympics taught forgiveness, resiliency to town council president 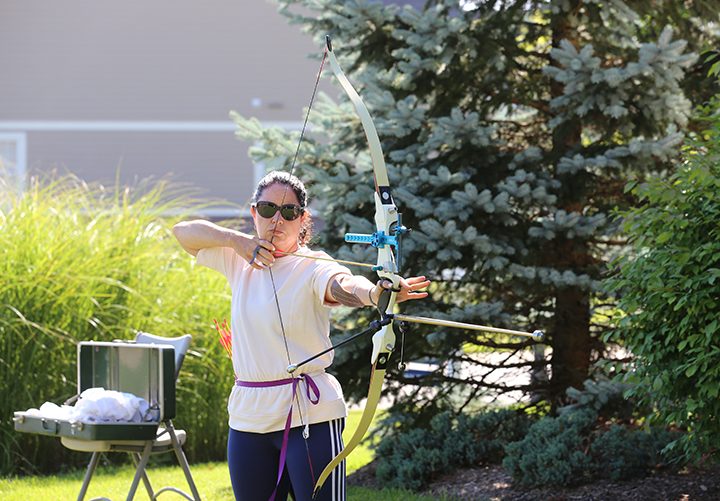 Susana Suarez practices archery in the yard at her Zionsville home. (Photo by Ann Marie Shambaugh)

Susana Suarez has a pretty impressive resumé: Zionsville Town Council president, owner and CEO of a communications marketing firm, former assistant director with FEMA and member of the Indiana Commission for Higher Education. But one thing that’s missing, that has haunted her for years, is Olympic medalist.

Suarez, 47, made the Mexican archery team for the 1984 Olympics in Los Angeles. But before the games began, her father got a promotion that required the family to move from Mexico to Cleveland, Ohio, and she was crushed.

“My father could not come to terms with leaving his 15-year-old daughter living by herself in Mexico City in an apartment,” Suarez said. “Of course at the time, I couldn’t understand it. I was furious.”

Suarez was so devastated that she didn’t even pick up her bow for a decade. But now, she said the sport – and the dismantling of her Olympic dreams – have taught her lessons on the range and in life. 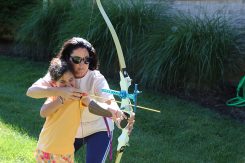 Susana Suarez helps her daughter, Eva, shoot at a target in the yard at their Zionsville home. (Photo by Ann Marie Shambaugh)

Suarez grew up in northern Mexico, the daughter of an American mother and Mexican father who divorced when she was 12 years old. Her family joined a country club where Francisca de Gutierrez, a 1972 Olympian, had begun an archery program.

“At the time girls were just not encouraged or exposed to sports, and here was a woman, an Olympian, teaching women and young girls how to do the sport,” Suarez said. “Something about that really called to me.”

After two years of practice, she officially became a member of the team and began competing in national competitions. She earned the top spot on the Mexican women’s team in the trials for the 1984 Olympics.

“That’s all she lived and breathed,” said Max Duarte, Suarez’s brother who moved to Zionsville in May. “After school, even on the weekends she would go straight to the archery range and train and train. That was her life.”

In January 1984, her father, an executive with Sherwin Williams, told her the family would be moving to Cleveland. Suarez pleaded with him to let her stay in Mexico long enough to compete, but he wouldn’t budge.

So Suarez, her father and three siblings headed north, to the nation that would host the Olympic Games later that year. Suarez traveled to Los Angeles to cheer on her former teammates, which she remembers as a bittersweet experience – but mostly bitter.

Her relationship with her father soured, too, but in maturing and having children of her own, she said she has come to understand why he made the decision.

“I couldn’t get over the fact that he would take that dream away,” she said, “But it also taught me a lot of forgiveness. It taught me understanding, allowing the fact that my best interests – in his mind – were served. So it took me a couple of years, but I got over it.” 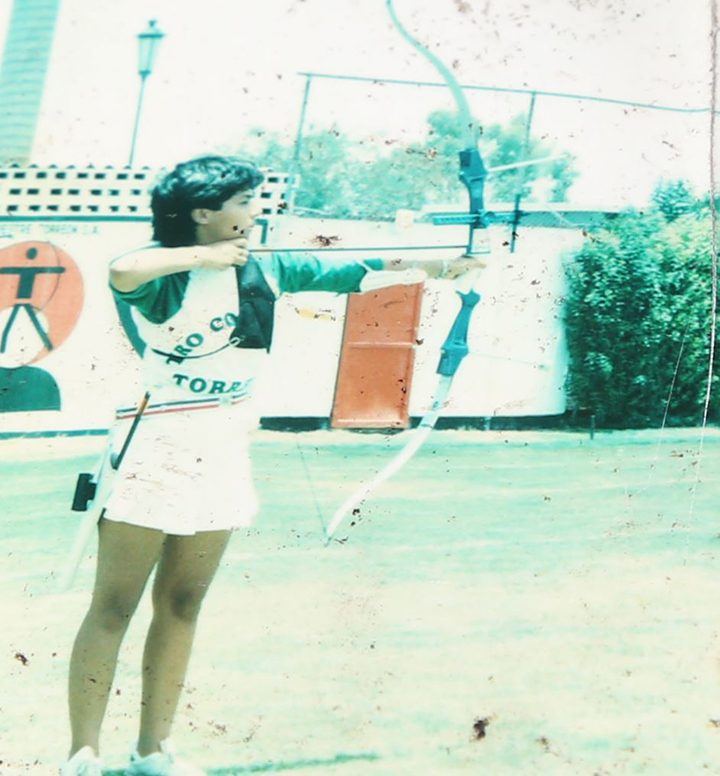 Suarez practices archery as a teenager in Mexico. (Submitted photo)

Life in the U.S. was completely different for Suarez than in Mexico. And she was too hurt to pick up her bow, something that had provided so much stability and confidence before.

“She’s just now starting to talk about it again,” he said. “She still has her competition bow from the Olympic team, and two or three weeks ago she took it out of the case for the first time in 30 years. She hasn’t lost it, (hitting) bullseye after bullseye.”

It wasn’t until she was asked to help a friend learn archery many years later that she was able to embrace the sport again.

“When that happened, I realized that the love and the passion for the sport was very much still there,” Suarez said.

By then, Suarez had graduated from Ohio State University and begun a career that took her to New York City, Boston, Washington D.C. and Houston, places where archery ranges were hard to find.

With two kids, her own business and political responsibilities, Suarez doesn’t have as much time to practice her craft as she’d like, but she’s interested in competing again someday if the opportunity arises.

Until then, Suarez practices for pure enjoyment, once again finding joy in a sport that brought so much pain. She savors the moment of quiet focus, however brief, before launching an arrow and revels in the joy of hitting her target. She said she even finds strength in missing the mark.

“You have to adjust when necessary and try again,” she said. “I think that’s a life lesson I’ve taken with me and I still use every day.” 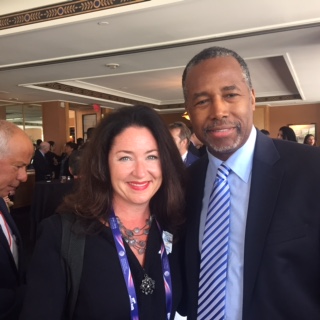 When Gov. Mike Pence accepted the role of vice presidential nominee, his departure created a domino effect of potentially open political positions in the state.

Suarez, who worked for the administrations of presidents George H.W. Bush and his son and served as an alternate delegate at the recent Republican National Convention, said she may be interested in running for higher office – but not now.

“Whatever office I would seek would have to be something that would allow me to be with my children,” she said. “I have been asked numerous times to consider Congress, Senate and so on. In the future, I would love to represent the people of Indiana in a higher office, but for now, it’s got to be local.”