You are at:Home»Night & Day»Entertainment News»Huber to lead Brazil Concert Band for Celebration of Bands in Carmel 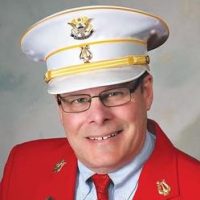 Huber, 63, was only 15 when he joined the band in 1968 as a last-chair trombone player. But over time and with experience, he grew into a larger leadership role within the group; Huber has been the director/conductor of the band for the past 35 years.

He was only 29 when took over the baton, “a young guy leading older people, and now it’s the other way around,” Huber said.

On Aug. 20, Huber will lead the Brazil Concert Band in a 45-minute concert at 11 a.m. at The Carmel Celebration of Bands at the Palladium.

and relative of mine – John Gus Davis,” said Huber, a retired teacher who still substitutes when he’s needed.

John Gus Davis’ father, John Brock Davis, was the band’s founder, and his son, Johnnie “Scat” Davis, was a singer, actor and trumpeter who appeared in several movies.

Two other marches the band will perform are “The Brazil Special” and “JCTB on Parade.” JCTB stands for Jackson Township Community Band, another group Huber conducts. It’s a medley of Indiana tunes written by Marvin Workman, which includes fight songs for Indiana University, Purdue University and the University of Notre Dame.

“I wrote a section for Indiana State when Larry Bird put ISU on the map, so we have ‘March On Sycamores’ in this,” he said.

Huber said one of the band’s first performances was at one of the Abraham Lincoln-Stephen Douglas debates in 1858, the year the band was founded.

There are approximately 70 members in the band. His son, John Philip Huber, 30, plays euphonium in the Brazil Concert Band as well as in the Indiana Wind Symphony.

“We named him for John Philip Sousa, hoping he would turn out to be musician,” Huber said.

John Philip will play with Indiana Wind Symphony’s two performances at the Celebration of the Bands, as will Alice Greenburg, a clarinetist who is also in both groups.