You are at:Home»Night & Day»Entertainment News»The Carmel Community Players to perform “Next to Normal” musical, beginning Aug. 5 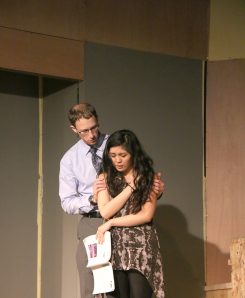 Daniel Hellman and Sharmaine Ruth rehearse a scene from “Next to Normal.” (Submitted photo)

The biggest challenge for Carmel Community Players presenting “Next to Normal” is the way the musical is constructed.

“Ninety-five percent of the show is sung and five percent is spoken,” said Carlo Nepomuceno, a Carmel resident who is directing the musical. “It’s basically all music.”

The CCP will present “Next to Normal” from Aug. 5 to 21 at the Carmel Community Playhouse at Clay Terrace, at 14299 Clay Terrace Blvd, Carmel.

The rock musical, which opened on Broadway in 2009, won three Tony Awards, including one for Best Original Score. It also became the eighth musical to win a Pulitzer.

There is a live band accompanying the rock musical show, directed by Levi Burke. The play and lyrics were written by Brian Yorkey, with the music by Tom Kitt.

The musical is about a suburban household dealing with mental illness.

“The mother struggles with bipolar disorder and hallucinations,” Nepomuceno said.

Georgeanna Teipen plays the role of the mother, Diana.

“We focus heavily on vocals and fine-tuning the vocals,” Nepomuceno said. “Everyone has learned all of the music.”

“I direct one show a year, most of the time the cast I have are not repeat cast members unless the show is similar,” Nepomuceno said. “The show I did last year is completely different. I’ve known the actors, but I have not directed them.”

“I acted in a lot of shows years ago but decided directing shows is more preferable for me,” Nepomuceno said. “I’ve been in shows since I was 13.”