You are at:Home»Current in Carmel»Carmel Community»Carmel City Council takes aim at speed humps 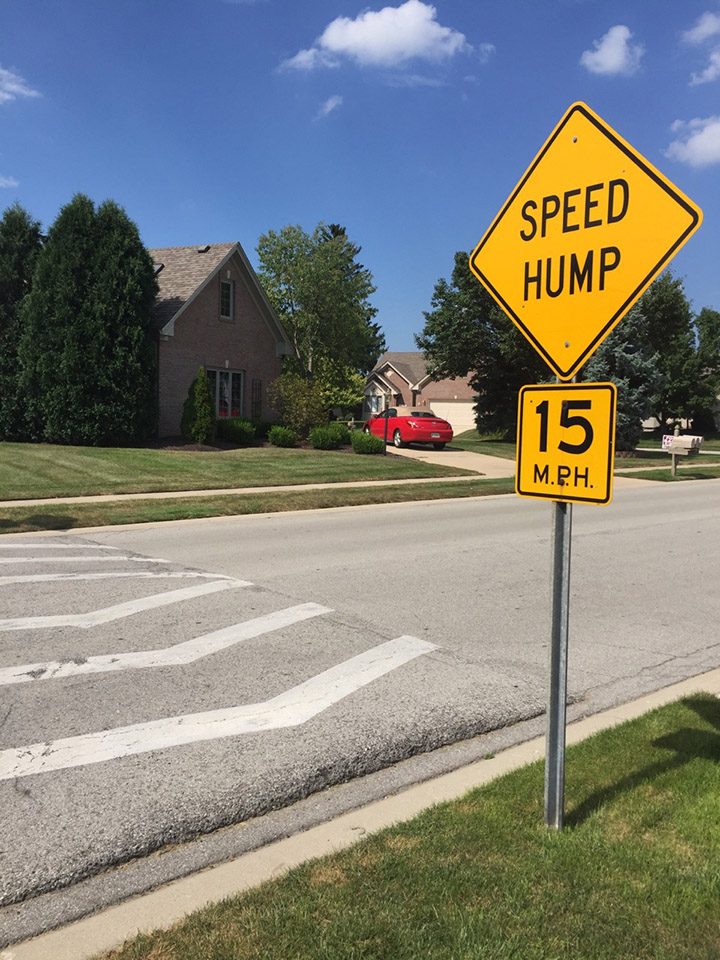 A speed hump along Medalist Parkway in Carmel. (Photo by Adam Aasen)

The Carmel City Council on Aug. 1 passed a new rule that requires residents to pay for removal of a speed hump if they are the ones that requested it to be installed.

The council decided to address the topic after residents requested a new speed hump on Windy Knoll Lane between Millbrae Drive and Cardinal Way, which was also on the meeting agenda. While the council wanted to comply with the request, some felt it was a good time to address issues surrounding speed humps, which are often made of pavement and used to slow traffic to approximately 15 miles an hour in residential or pedestrian-heavy areas.

The council approved a speed hump for Windy Knoll Lane.

Officials said residents often file a petition with the city for the addition of a speed hump only to regret that move and ask for it to be removed soon after it is installed.

“It’s kind of, ‘be careful what you wish for,’” City Councilor Bruce Kimball said.

Carmel Mayor Jim Brainard said sometimes residents think that a speed hump is the best option to protect children playing from negligent motorists exceeding the speed limit, but he said police can enforce the laws and other methods can be used to curtail dangerous drivers. He said speed humps cause wear and tear on vehicles and reduce response times for emergency vehicles such as ambulances, fire trucks and police cars.

City Councilor Kevin “Woody” Rider pointed out that they are trouble for snow plows.

“How well do our snow plows go over that?” Rider asked at the Aug. 1 meeting.

In order to get a speed hump installed, residents have to get 75 percent of the neighborhood to express support in writing that they support the speed hump; the city engineer has to approve the speed hump; and the council has to also approve it. There are six residential speed humps approved in Carmel: Medalist Parkway between 122nd Street and 126th Street; Emerson Road between York Drive and Sherman Drive; Emerson Road between Lantern Lane and Guilford Road; Sherman Drive between Emerson Road and Main Street; Milano Drive between LaBlanca Bend and Olivia Lake Drive and now Windy Knoll Drive between Millbrae Drive and Cardinal Way.

“Generally, they are not a good thing,” Brainard said. “There are some exceptions where they make sense. We wanted to make the bar somewhat high.”

Brainard pointed out that the Wilson Village neighborhood asked for a speed hump to be removed about two years after it was installed. In other cases, such as roads behind the 96th Street car dealerships, the speed humps have made sense because some car buyers have tested out vehicles they might want to purchase in these neighborhoods and sometimes they are exceed the speed limit, Brainard said.

The cost is usually less than $1,000. The law provides a five-year window, so after five years the residents wouldn’t have to pay for removal.

“With that short amount of time, they might wait it out and take it out at our expense,” Worrell suggested.

Brainard said he felt OK with the five-year window, because by that time most people are used to the speed humps and wouldn’t ask for their removal in most cases. The council decided to suspend the rules and vote on these changes on first reading and unanimously pass the ordinance.