You are at:Home»Current in Zionsville»Zionsville man summits Mt. Kilimanjaro 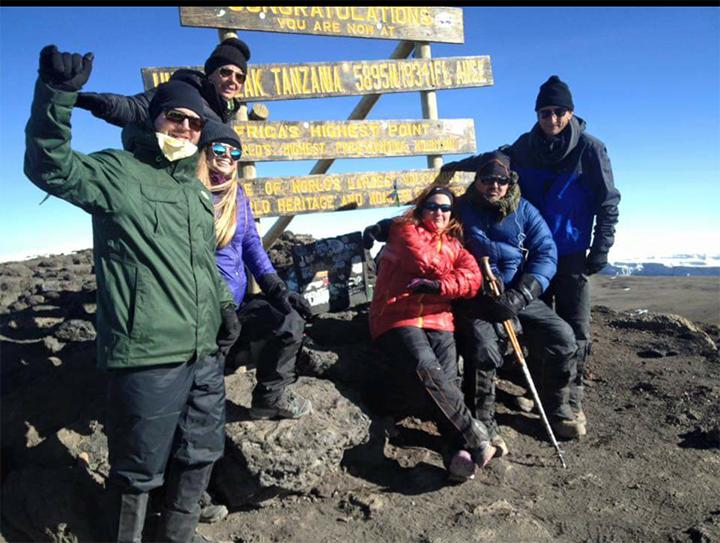 From left, Chris Wallace of Indianapolis, Olivia Anderson of Atlanta, Ga., Angela Griffith of Atlanta, Andrea Ryan of Carmel, Bill Ryan of Carmel and Brian Debshaw of Zionsville at the summit of Mount Kilimanjaro. (Submitted photo)

The perception would be that one has to be very fit to climb Mount Kilimanjaro. Not so, Carmel resident Bill Ryan said.

“I don’t consider myself a stud by any means,” Ryan said. “But I’m not a couch potato. I would say if you can run five miles, you should be able to get up the mountain.”

However, Ryan, 38, had never climbed before when he and his wife, Andrea, 41, joined friends to summit the mountain in July. Among them was Zionsville resident Bryan Debshaw.

Debshaw, 45, who regularly runs with Andrea, encouraged the couple to join his group on the trip. He took an Auburn online MBA program, where the students met on campus each semester for one to two weeks. There he met Angela Griffith, from Atlanta, who expressed a desire to climb Kilimanjaro.

“I made a deal with her, you run with me and I’ll climb Kilimanjaro,” said Debshaw, who puts together teams for a 200-mile relay races called Ragnar. “I just like getting groups together to challenge themselves to do something they wouldn’t do otherwise.”

Kilimanjaro is the highest mountain in Africa, 19,341 feet above sea level.

Debshaw was definitely glad he did it.

“It was a ton of fun and a great group of people and great guides,” Debshaw said. “The most challenging part was probably on the summit day the altitude and the thin air. It does affect you. I was the only one who didn’t take altitude pills. The day we did summit, it definitely slows you down and it’s hard to breathe. It slows down your mental process.”

The group all agreed they would do the Great Wall of China marathon in May 2018. The Ryans are considering joining Debshaw on an upcoming Ragnar Relay in Michigan.

Debshaw, chief executive officer of POLARIS Laboratories, said he never did any serious mountain climbing before.

Debshaw has 27 years of military experience and serves as a lieutenant colonel and commander of the Indiana Air National Guard in Terre Haute.