You are at:Home»Current in Carmel»Carmel Cover Stories»Man of Steele: Johnson flying high as Carmel’s first Olympian 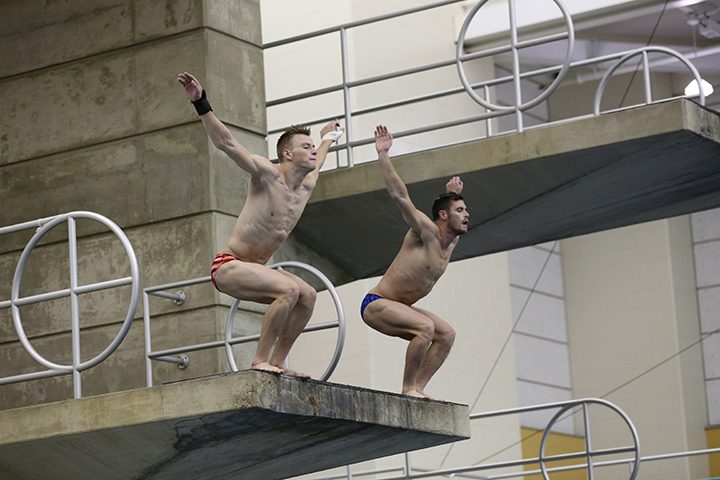 Steele Johnson, left, and David Boudia practice synchronized diving at Purdue University. They will compete as a team at the Rio Olympics. (Photo by Ann Marie Shambaugh)

It all started about 18 years ago, when a young child who couldn’t even swim without assistance would spend hours jumping off of the diving board at his neighborhood pool in Noblesville.

Now that kid – Steele Johnson – is in Rio de Janeiro, where he’ll be throwing himself off a much bigger platform with much higher stakes. Johnson, 20, is competing in the Olympic games as a 10-meter platform diver in the individual competition and with synchronized diving partner David Boudia, a 2012 Olympic gold medalist and fellow Hamilton County native.

“The moment I qualified it was like 12 years of work finally came together,” said Johnson, the first person from Carmel to make an Olympic team. “It was kind of a cool moment. Definitely not how four years ago I would’ve envisioned this going down, but it’s a lot sweeter than I was expecting it to be.”

Climbing to the top 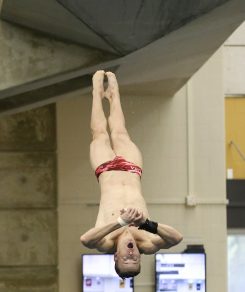 Johnson’s unlikely road to Rio began in Hamilton County. He was born the second of three children to Bill and Jill Johnson, neither of whom had any experience diving. But – as they saw at a very young age – Steele was a natural.

“We knew nothing about diving except we had this kid we couldn’t get off of the neighborhood pool diving board,” said Jill Johnson, Steele’s mother, who admits to having “an extreme fear of heights and falling.”

The family soon signed Steele up for diving lessons, and a fun diversion eventually turned into a serious pursuit when top-level coaches – including one who had worked with Olympic gold medalist Greg Louganis – began to take notice.

Steele worked his way to the top of the junior, and then senior, national diving ranks, pulling out of Carmel Clay Schools to homeschool so he could have the flexibility to train at IUPUI. At age 10 he would catch a ride to practice from Boudia, who was 17 at the time, along with former Olympian Mary Beth Dunnichay, then 13.

After Steele graduated from middle school, his parents asked him if he’d like to cut back on the diving and attend Carmel High School, with his brother, Race.

“He was very happy with what he was doing. He loved diving, and it was his passion,” said Jill, who noted the family moved to Carmel for the school district. “To be a diver you do have to be kind of a lone wolf and like your independence, so it was a good fit for him.”

Steele took high school classes online through Laurel Springs School, then went to Purdue on a diving scholarship. He competed on the team as a freshman and red-shirted this past year to focus on Olympic training.

Steele said he began to see the Olympics as a real possibility about four years ago during a trip to a North Carolina lake house with teammates as he watched from an iPad as Boudia finished first in the 2012 London Olympics.

“I just remember everyone losing their minds when David won gold,” Steele said. “It was super cool to watch him go through that and be so loving and so humble about it all the time. It definitely inspired me to want to work as hard as I could starting that day so I could at least get on the 2016 Olympic team.”

Boudia, a Purdue University graduate who is going to his third Olympic games, said Steele has helped bring a fresh perspective for Rio.

“It’s cool to be able to be with a first-time Olympian, to see the excitement,” Boudia said. “Sometimes I get numb to the fact that this is pretty cool, that you made the Olympic games and you get to compete for your country. Steele helps me see that, and I’m thankful for that.”

The divers describe their relationship like brothers. Steele said Boudia has not only made him a better diver but has set an example as a man of faith, as well.

“The best lesson is to realize that diving is not my life. My identity is rooted in Christ. It’s not rooted in whether or not I make the Olympics,” Johnson said. “(David has) inspired me to take diving with a grain of salt, because there’s so much more to life than doing flips.”

As the possibility of Steele heading to the Olympics became a real possibility, the Johnson family wondered if they would be able travel to Rio to show their support from the stands.

Thanks to the support of the Carmel community and beyond, the entire family is heading to Brazil. A family friend set up a GoFundMe page, which raised $20,760 for travel in addition to gifts from others in the area.

Bill, who is self-employed as a real estate appraiser, and Jill, who works for an international business college, said many people assume that everyone who lives in Carmel is well off, but that is not the case.

“Diving has put our family into debt, and we don’t regret it, but we are now in a position where we are being so blessed by the community,” Jill Johnson said.

Bill, Jill and their daughter, CHS incoming senior Hollyn, will be in Rio for all of Steele’s events, but their son, Race, will only be present for the synchronized diving competition. He plans to catch a plane back to the U.S. just a few hours after the event to rejoin his teammates on the Purdue football team for training camp.

“It’s nice for us all to be together at least for one event,” Bill said. “This is a team effort, and it’s special, and of course the folks that have donated and made this all happen for us – I can’t even comment, I’m choking back tears.”

As if twisting and turning through the air after jumping off a three-story platform as the world watches isn’t scary enough, this year’s Olympic games have brought added concerns. Rio has one of the highest murder rates in the world, and it is in the heart of the Zika virus outbreak, which has led some Olympians to bow out.

In fact, he has visited Brazil twice in the last year, and he said it’s among his favorite places.

“I wasn’t worried either time. I just took bug spray and I got the immunizations that I needed,” he said. “We were preparing the best we could, but I just went down, had an awesome time and really enjoyed Brazil.”

In addition to medals, David Boudia has two Olympic rings, which are given to athletes after competing in the games. He continued a U.S. Olympic diving tradition by passing his ring to a new member of the team after qualifications.

His choice of teammate and training partner Steele Johnson was obvious, but the way he presented the ring was not.

“I tried to make it as special as I could,” Boudia said. “I stopped by his college house, grabbed the jacket from his closet and brought it back to Indianapolis. It was a cool little thing I could do where I knew I wanted to give him my ring before he got his own, so I just slipped it in his jacket pocket.”

Johnson said he wasn’t surprised to receive Boudia’s ring – which he will return after he gets his own – but he considers it a special moment.

“It was definitely really cool to see him wearing it for the past eight years and to finally have my own,” Johnson said.

College: Will be a red-shirt sophomore at Purdue University.

After diving: Wants to attend a film school and eventually create documentaries.

Other hobbies: Enjoys playing music and singing. Has led worship at his church and college groups.

Siblings: Race, a football player at Purdue; and Hollyn, a senior at CHS.