You are at:Home»Current in Carmel»Good Morning America producer has Carmel ties 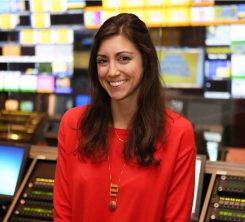 Adriana Pratt grew up in Carmel and is producer and writer for Good Morning America. (Photo by ABC/Fred Lee)

Adriana Pratt wanted to be a journalist since she was in second grade.

“I knew that was the direction I wanted to go,” said Pratt, who grew up in Carmel and graduated from Guerin Catholic High School in 2008. “I wasn’t sure if it would be newspapers or magazines or television.”

At Notre Dame, she was assistant managing editor of the school newspaper.

“I thought I was going to go more print, but all the internships turned into TV,” Pratt said.

Now 26, Pratt has been a writer/producer for ABC’s “Good Morning America” for more than two years.

Pratt had an internship with NBC’s London bureau in 2010 and was a production intern with ABC’s “Nightline” in 2011.

After graduating from Notre Dame in 2012, she took a job as production coordinator and assistant to senior vice president of content and development for ABC News. From there, she became a writer for a “Good Morning America” in February 2014.

Pratt, who lives on the Upper West Side of New York, wakes up at 2 a.m. and gets to work 45 minutes later. She first checks emails and makes sure she knows all the latest updates for the stories in the show’s rundown.

“I look at all the copy for the anchors, revise, update and edit it,” Pratt said. “Then, when the whole team comes in, we watch all the pieces and update the show and figure out what stories to lose and what stories to keep. From there, I tighten, read through all the copy and make sure everything is good to go.”

Pratt said one highlight is how her team handles breaking news.

“For the Brussels bombing (in March), we had to wipe out the entire show and the whole two hours became breaking news coverage. As it was happening, it became five hours of live coverage for ‘GMA.’”

The show stayed live for Central and Western time zones.

“On a lighter note, I got to interview (actress) Mindy Kaling, and she is my favorite ever,” said Pratt, a fan of “The Office” and “The Mindy Project.” “She is just as great in person as she is on the show.”