You are at:Home»Current in Carmel»Carmel Community»City tries to naturalize area along road near Brookshire Golf Course 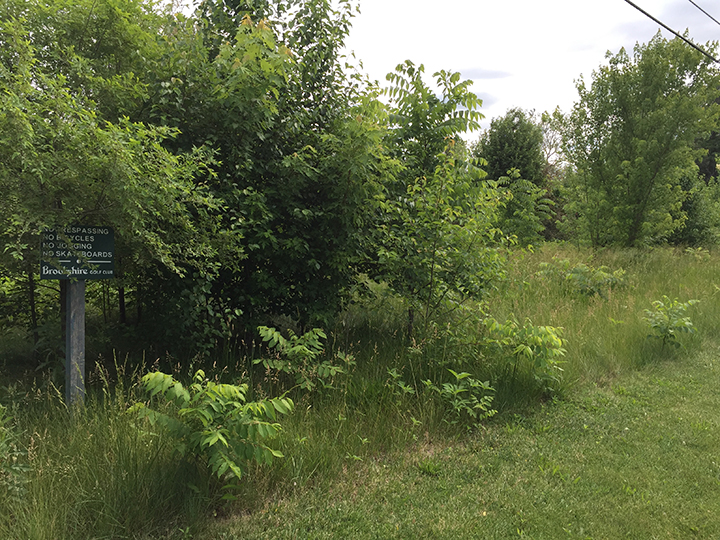 A weedy-looking area near Brookshire Golf Course is expected to look much nicer once it develops a tree canopy, which will result in less mowing and save the city money. (Submitted photo)

City Councilor Jeff Worrell is telling his constituents to be patient when it comes to an area full of weeds near the Brookshire Golf Course along 116th street.

He said he received calls from neighbors complaining that the area was unsightly and not pleasing to the eye with tall weeds growing such as Canadian Thistle. One neighbor, Stacy Hicks, brought it to Worrell’s attention.

“She rightly asked if something could be done,” Worrell said.

Worrell met with Hicks, along with City Forester Daren Mindham and Brookshire Golf Course Supt. Bob Higgins to find out that the area was part of the city’s efforts to create a cost-effective natural green space border that doesn’t need bi-weekly mowing with a mature tree canopy covering the area.

“What we learned is that there is a concerted effort to choose certain areas and naturalize them by letting them generate a tree canopy that cannot support tall grass or weeds,” Worrell said. “This is a multi-year project, and a less than perfect visual result occurs during the early years. However, a good outcome can be witnessed at the southwest corner of 116th and Hazel Dell.”

Worrell said he understands the neighbors’ initial concerns, and he felt the same way before he learned more.

“I was disappointed when I went by it, but I wasn’t educated,” he said. “So it looks very unkempt, but it’s actually an area that’s trying to be naturalized. It might be unsightly for five years, but once the tree canopy is built up you won’t have to mow it as much, and it’ll look great.”