You are at:Home»Current in Carmel»Carmel Business Local»Bowling alley and theater center planned for Hamilton Crossing space in Carmel 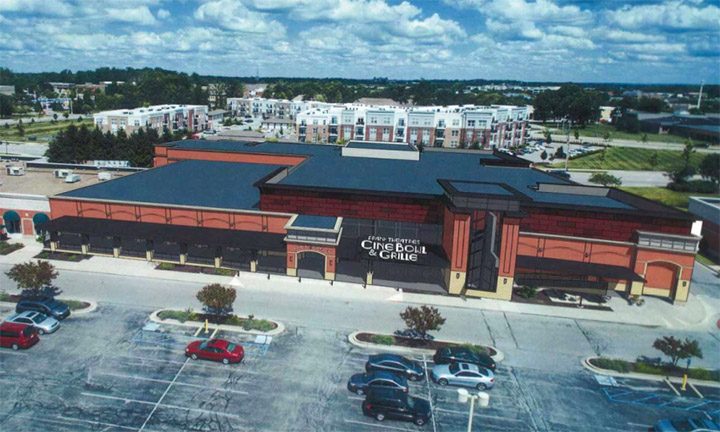 A rendering of the proposed entertainment space. (Submitted rendering courtesy of the Carmel Plan Commission)

A movie theater and bowling alley is being proposed as Kite Realty aims to tear down its existing Hamilton Crossing Center near U.S. 31 in Carmel. Presently, the shopping center is home to Jason’s Deli and a vacant space formerly occupied by Office Depot.

The plans, submitted to the Carmel Plan Commission, would expand the existing building footprint in order to make way fro CineBowl & Grill, which would include 16 lanes of bowling, 10 movie theater screens, a video game arcade and a restaurant with indoor and outdoor dining. The Frank Theatres company would operate this business.

The site is located is in the U.S. 31 overlay zone, which does not allow for a theater or bowling alley, so the petitioner, using Krieg DeVault as its legal representation, is asking for a use variance. There is no word yet about whether Jason’s Deli or any other businesses would be relocated.

The new building is proposed to be 50,400 square feet, which is nearly the same footprint as the existing building. No additional parking spaces are proposed and none are expected to be removed.