You are at:Home»Night & Day»Entertainment News»Beer memorabilia collectors to gather for Breweriana show Aug. 6 in Carmel 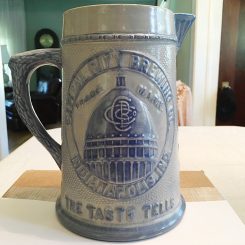 A stoneware serving pitcher from the Capital City Brewing Company, which was located south of downtown Indianapolis and was in business from 1905 to 1915. (Submitted photo)

John Ferguson has been a member of National Association Breweriana Advertising’s board for about 30 years. In his second year as NABA president, the Indianapolis resident is seeing the national convention come to his area for the first time.

The 45th annual NABA’s free public trade show will be held from 9 a.m. to 2 p.m. Aug. 6 at the Renaissance Hotel, 11925 N. Meridian St., Carmel. The show caps the convention, which starts Aug. 2. John Ferguson said this is the first time it has been held in Indianapolis.

“It’s a nice way to show the people what the hobby is all about, too,” Ferguson said.

Ferguson’s interest started when he was trying to write a master’s thesis in the 1970s on the Indianapolis brewing industry. He soon learned there wasn’t much information.

“Since there hadn’t been any breweries operating in Indianapolis since 1948, no one remembered much,” Ferguson said. “I started finding all these collectibles. Initially, I started collecting pre-Prohibition etched beer glasses. They were real thin glasses that the breweries gave out. They usually had a logo, or the name of the brewery or a picture of a factory.”

Carmel resident Chip Viering, 53, a member of NABA and the Beer Can Collectors of America, is helping to promote the show.

“I’ve been a collector of beer signs, beer cans and everything since Billy Beer came out in 1977,” Viering said.

Made by Falls City Brewing Company, Billy Beer was promoted by Billy Carter. Billy Carter was the younger brother of President Jimmy Carter, who was elected in 1976. The company stopped producing the beer less than a year later.

“A lot of us concentrate on a certain area because you can’t collect it all,” Viering said. “I grew up in Akron (Ohio) so I have an extensive collection of Akron and Cleveland signs, cans and lighted neons.”