You are at:Home»Current in Zionsville»Zionsville school board honors all-academic, all-American lacrosse player 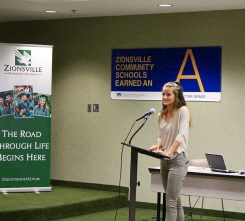 Sydney Blake speaks at the school board meeting. (Photo by James Feichtner)

The Zionsville Community Schools board of trustees met July 11 to honor a student athlete and get a preview of the district’s new website, among other matters.

The board recognized Zionsville Community High School 2016 graduate Sydney Blake for her accomplishments on the varsity lacrosse team and in the classroom.

Blake, who moved to Indiana from Minnesota, was first introduced to the sport in Zionsville.

“I just wanted to thank my coaches,” Blake said. “They really brought all of that to me and were the reason I could become the player that I was and the player I will continue to be. Zionsville will always be my home and will always be my start to my love of lacrosse.”

In other school board news, the board saw a preview of the new Zionsville Community Schools website. Staff spent the majority of the summer working on the new design, which aims to replace the existing site later this year.

“We’re going to have a very streamlined website coming up, and it’s going to be replacing our old, out-of-date and not-so-secure website very soon,” Chief Technology Coordinator Dan Layton said. “We’ve got some really neat pieces coming in terms of picture slides, and there’s going to be video as well and some other surprises.”

The board unanimously approved a contract renewal for the continued employment of ZCS Supt. Dr. Scott Robison.