You are at:Home»Current in Westfield»Returning referendum: Westfield residents will have option to vote on a 20-cent tax for school funding come Nov. 8. 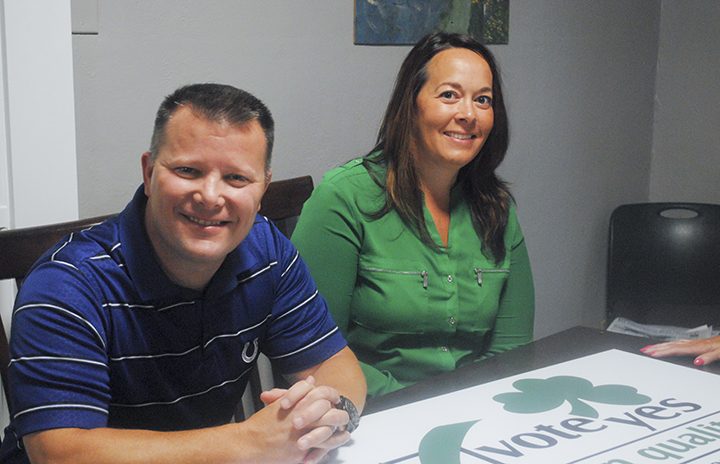 Scott Willis and Danielle Carey Tolan work to educate the public about the upcoming referendum to be placed on the Nov. 8 ballot. (Photos by Anna Skinner)

Parents of students in the Westfield Washington Schools district will have more to decide this fall than which school supplies to buy.

The end of the seven-year referendum, voted on in 2009, is approaching. Another referendum to aid in school funding will be placed on the Nov. 8 ballot, giving Westfield residents the chance to vote on a potential 20-cent tax per $100 of assessed value.

“We weren’t necessarily needing that 23 cents for 2016 so it was decided to lower it (to 20.9 cents),” WWS Supt. Dr. Sherry Grate said. “We are saying to the taxpayers that we are going to be good stewards of their taxpayer dollars. If they approve the 20 cents per $100 of assessed value, we would have reduced the referendum by a total of 3 percent.”

“The complexity grant is based on demographics, and at this time, this is where the huge differential exists for WWS versus the state average,” Grate said.

Due to Hamilton County not having as diverse of a socioeconomic status as other cities, such as Indianapolis, the district receives less money from the state. If the referendum passes in November, $734 extra would be available per student.

If the referendum does not pass, Grate said there would be a decrease in personnel and an increase in class sizes. Referendum dollars are used for technology expansion, personnel, instructional programs and managing class sizes.

“You’re looking at us losing $5.2 million a year (without the referendum,)” she said.

Scott Wills and Danielle Carey Tolan, co-chairs of the Westfield Invest in Quality Political Action Committee, said they got involved with promoting the referendum because their children are students at WWS. Tolan is a fourth-generation graduate of Westfield High School.

“Communities that have top-rated schools have higher property values, lower crime rates, better amenities, better paying jobs … Corporations bringing their businesses are looking at the quality of school systems,” Willis said. “We are investing in our entire community, and everybody benefits from good schools.”

Despite the lack of funding from the state, WWS is in the top 3 percent of ISTEP scores in the state and has the highest graduation rate in Hamilton County, at 98.2 percent.

Presently, the school district is growing at a rate of 400 students each year, approximately half the size of an elementary school.

“We’ve got a unique challenge no other school district in Hamilton County has,” Willis said. “We are growing at such a fast rate right now, and the referendum can’t be used for buildings; it’s being used to hire teachers to keep the class sizes down as much as we can.”

For more on the Westfield Yes campaign to pass the referendum, visit westfieldyes.com. 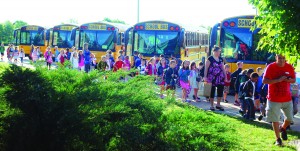 A referendum calling for a 20-cent tax to aid in school funding will be placed on the Nov. 8 ballot. (File photo)

Locals have expressed concerns over the school district being responsible with the tax received from the referendum. Several Westfield residents, who asked not to be named, raised questions via social media. Some of their questions and concerns include:

Scott Wills and Danielle Carey Tolan, co-chairs of the Westfield Invest in Quality Political Action Committee have heard these before, and hope to educate the community in answering these.

“Any time you’re raising taxes, people question whether or not it’s necessary and if the school is using money efficiently and whether it’s needed,” Willis said. “We have heard a lot of, ‘The school district is ranked highly, so why do we need money?’”

“The biggest thing is keeping people informed. That’s the biggest complaint we have is people saying, ‘I didn’t know about it,’” Tolan said.

Westfield Washington School district is in the top 3 percent of ISTEP scores in the state and has the highest graduation rate in Hamilton County, at 98.2 percent.