Connor Hitchcock has combined two of his loves together to form a company. 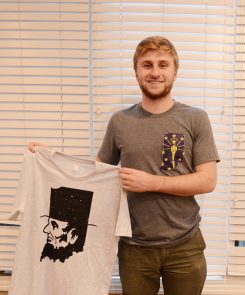 Connor Hitchcock with one of his designs. (File photo)

“I’ve always enjoyed apparel and tied with that is really appreciating home and where you are,” said Hitchcock, who graduated from Carmel High School in 2013.

“I always bounced around a lot as kid, moving around the Midwest, finally settling in Indiana. For 10 years, we lived in Carmel. I didn’t have a great sense of home until my final years of high school. So I took the subject of home with that love for apparel along with the skills I was learning in business.”

Hitchcock has a business partner, Austin Holsinger, who owns 20 percent of the business (hoosierpride.com). Holsinger, who helps with strategy and funding, is Hitchcock’s fiancée Christa Breaugh’s cousin. Holsinger had started a Great Lakes Proud online story featuring stickers in 2011.

“I bounce ideas off of him, but I’m the day-to-day face of the company to all these retailers,” Hitchcock said.

Hitchcock said the business really began to pick up in February 2015.

“We began to be picked up by a bunch of retailers and our online presence began to grow,” he said. “Now we’re in 25-plus retailers around the state.”

“It’s a for-profit business, but every T-shirt we sell with a pocket, we take a $1 and give it to the state’s Habitat for Humanity,” Hitchcock said.

Hitchcock and Breaugh design the shirts for both businesses.

“We try to be weird and quirky,” Hitchcock said. “It’s a one-man show. It hasn’t grown enough where I can hire any employees.”

Hitchcock is on schedule to graduate a semester early in December.

“I will be taking two online, general-education classes that last semester, so I’m done with my business classes in Bloomington,” he said. “So I can see where Hoosier Proud and State Pocket Tees can go if I essentially give it my full time.”

This summer, Hitchcock is interning with Target as a business analyst in Minneapolis.

“I’m exploring all these options,” he said.

1. Plan everything, always add extra time and money to the budget for the unexpected.

3. Put people first, everything else following.