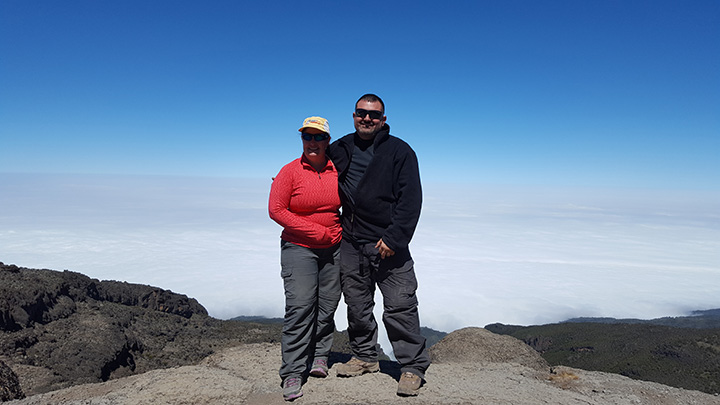 Andrea and Bill Ryan of Carmel pause during their hike on Mount Kilimanjaro. (Submitted photo)

Perception would assume an individual has to be very fit to climb Mount Kilimanjaro.

Not so, according to Carmel resident Bill Ryan.

“I don’t consider myself a stud by any means,” Ryan said. “But I’m not a couch potato. I stay in decent shape. I would say if you can run five miles, you should be able to get up the mountain.”

However, Ryan, 38, had never climbed before when he and his wife, Andrea, 41, joined four other friends to summit the mountain earlier this month.

“We started hiking over Eagle Creek, but this was the first major hike or climb for us,” said Ryan, who prepared by using a stair stepper.

Kilimanjaro is the highest mountain in Africa at 19,341 feet above sea level.

“It’s the largest mountain you can hike without any technical climbing,” Ryan said. “There was more climbing than we thought. But nothing technical, just physically getting your butt up the hill was all it was.”

Ryan said summer is the best time to go before the rainy season begins.

“We didn’t encounter any rain,” he said. “That was wonderful because it’s extremely difficult to climb then.”

“It was the hardest on your body,” Ryan said. “Other than acclimating to the air, that was difficult. Once you get past 16,000 feet it becomes difficult to breathe. Downhill is hard on your feet, ankles and legs because it’s really hard to train for. They taught you to use your heels instead of your toes.”

The group took the south route of Lemosho, 42 miles total.

“It’s six days to summit and two days to go down,” Ryan said. “You basically run down the mountain. It was pounding on your joints and body. Going there, I thought downhill would be the easiest part.”

Each level featured a different type of climate.

“We literally started in shorts and gym shoes, and we were in parkas by the time we got to the top,” Ryan said.

For summit night, when it was 12 degrees, the Ryans wore two layers of socks with toe warmers, two pairs of long underwear, one pair of pants, three layers on top plus two jackets, gloves and mittens with hand warmers,

“Every day was different. The first day was pretty easy, a flat walk but it was just building muscles,” Ryan said. “Each day was a little more difficult. By the end, it was ridiculously hard.”

The mental factor presents a challenge as well during the trip.

“‘Why am I doing this? What am I, crazy?’ pops in your head a lot,” Ryan said. “At times, you would see the end point (camp) but it was still, two to sometimes three hours from where you were. That’s when you started to make little goals in your head.”

For example, Ryan would pick out a rock or tree in the distance to make it.

The Ryans’ friend, Bryan Debshaw, a Zionsville resident who regularly runs with Andrea, encouraged the couple to join his group on the trip. Debshaw, 45, took an Auburn online MBA program, where the students met on campus each semester for one to two weeks. There, he met Angie Griffith, from Atlanta, who expressed a desire to climb Kilimanjaro.

“I made a deal with her: ‘You run with me, and I’ll climb Kilimanjaro,’” said Debshaw, who puts together teams for 200-mile Ragnar relay races.

Like Ryan, Debshaw said he was glad he climbed the mountain.

“It was a tons of fun and a great group of people and guides,” said Debshaw, who serves Indiana Air National Guard in Terre Haute. “The most challenging part was probably, on the summit day, the altitude and the thin air. It does affect you. I was the only one who didn’t take altitude pills. The day we did summit, it definitely slows you down, and it’s hard to breathe. It slows down your mental process.”

The cost of the guided-hike was approximately $6,000 per person, Ryan said.

“Add a little extra for equipment. It depends what you already have for camping and winter gear,” said Ryan, who is an avid camper. 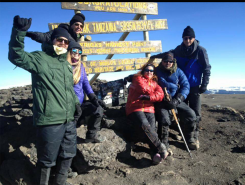 From left, Chris Wallace of Indianapolis, Olivia Anderson of Atlanta, Ga., Angela Griffith of Atlanta, Andrea Ryan of Carmel, Bill Ryan of Carmel and Brian Debshaw of Zionsville at the summit of Mount Kilimanjaro, 12 degrees outside (Submitted photo)

Bill Ryan said the group all agreed they would do the Great Wall of China marathon in May 2018.

“That’s going to be our next (major) adventure trip,” he said.

However, the Ryans are considering joining Debshaw on an upcoming Ragnar Relay in Michigan.

The Ryans want to instill their adventurous spirit into their children. They brought back Kilimanjaro rocks for their daughter, Taylor, 12, and son, Alex, 10.

“We challenged them to return them some day to the top of the mountain,” Ryan said.