Edwin the Duck, the brainchild of Carmel’s pi lab, has taken large strides recently with adding music development to its array of other educational activities linked through a mobile app and centered on children ages newborn to 5 years old. 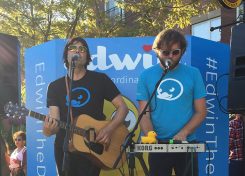 Vess von Ruhtenberg, left, and Adam Gross play to a crowd at Art of Wine July 16. (Photo by Anna Skinner)

“We wanted to teach kids how to read music and how to carry a tune and have hands-on, experiential learning,” said Don Inmon, co-founder with Matt MacBeth.

Cue the Wingmen is a two-man band, made up of Vess von Ruhtenberg and Adam Gross, which sing songs featuring Edwin the Duck. Inmon said the songs will eventually be turned into interactive cartoons.

“The songs they’re singing are about shapes and getting along with friends and eating healthy,” Inmon said. “As this progresses, we are going to move into large concert venues, and kids can go into the show with their Edwin.”

At the yet-to-be-planned larger venues, Inmon said all the Edwins can synch together to create a flow of music or a flow of sounds.

Until then, The Wingmen are playing at smaller venues, most recently at Art of Wine festival in downtown Carmel July 16.

“Our primary customer is a first-time mom and friends of that first-time mom,” Inmon said. Art of Wine was The Wingmen’s fourth show. “This is a brand new idea, and adults love this as much as kids. It’s about getting kids into hands on learning and not being connected to a screen, but connected to the message.”

The Wingmen said the music is similar to melodic rock.

“It was luck (getting together) actually,” von Ruhtenberg said. “A friend of a friend put us in touch with each other and hooked us up with Adam. We are singing songs about or around the idea of Edwin. Some are more direct than others.”