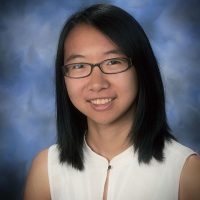 “For me, the title of a U.S. Presidential Scholar is not only an amazing honor that I am so grateful to have received but also the introduction to a welcoming, tight-knit community of which I am so excited to be a part,” she said.

The recent Carmel High School graduate was one of two students from Indiana to be named a 2016 Presidential Scholar. The honor was given to 160 U.S. high school seniors who have demonstrated academic achievement, artistic excellence, leadership, citizenship, service and contribution to school and community.

Yue and the other scholars were honored for their accomplishments June 19-21 in Washington, D.C. One male and one female student from each state, District of Columbia and Puerto Rico and from U.S. families living abroad. In addition, there are 15 chosen at-large, 20 Presidential Scholars for the Arts and for the first time 20 Presidential Scholars in Career and Technical Education. The program is for recognition and includes no monetary scholarship.

“It provided me with the opportunity to meet brilliant people who represent all of the great things that embody the future for the nation,” Yue said. “We were able to meet with our nation’s leaders in the heart of the nation and participate in enlightening forums and discussions.”

Yue plans to major in statistics at Yale University. She also is interested in computer science.

Yue was selected in early May after a nominating process.

“The most common way that a student gets chosen as a (Presidential) Scholar is through their ACT or SAT score,” Yue said.

A perfect score of 36 on the ACT earns automatic nomination to the first part of the application. Yue just missed, getting a 35.

“The way I was nominated is my school nominated me and one other student to be considered by the Chief State School Officer, who then nominated me for the first step of the application program,” Yue said.

The Presidential Scholars are offered the opportunity to name their most influential teacher, who receive a letter from the Secretary of Education. Yue chose CHS English teacher John Love, who taught her Advanced Placement Capstone seminar class.