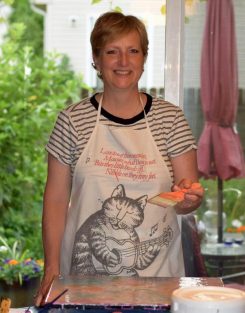 Artist Kristina Oliver. “It’s a very healing thing for me to do art,” Oliver said of painting. (Submitted photo)

For Kristina Oliver, art is about the process, not the final product.

“A lot of artists like control over their art and I learned I’m the opposite,” Oliver said. “I like to see where the art takes me and let it take over my process.”

Oliver delved into art at a young age with her mother, who she described as a very artistic and creative person. She continued practicing through art classes, but it wasn’t until her mother died that Oliver realized this might be the only time to make art a career.

Both Oliver and her husband quit their jobs in October to pursue art. She said that was a blessing in disguise when her father’s health began to decline shortly afterward because she was able to travel to Canada to visit him.

After losing both parents within a year and a half, art has been her escape.

“It’s a very healing thing for me to do art. It’s the only time the chatter in my head stops,” Oliver said.

In January, she submitted artwork to the Hamilton County Artists’ Association. HCAA is a nonprofit organization focused on promoting the arts. The juried members vote on applicants, and Oliver was selected to join. She said the organization works hard to find opportunities for their members, which is how she got her first solo exhibit.

The exhibit features 13 original, abstract pieces. It is open all month at the Noblesville Visitor’s Center from noon to 5 p.m. daily, except Sundays. All pieces will be for sale with 20 percent of the profits going toward the Alzheimer’s Association and the Michael J. Fox Foundation for Parkinson’s to honor her parents.

“I hope people enjoy it because it’s kind of different from other art,” Oliver said. “You look at this art and use your imagination.”