You are at:Home»Current in Fishers»Ji-Eun Lee Music Academy releases album 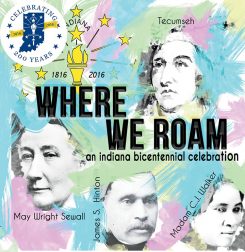 The album, titled “Where We Roam: An Indiana Bicentennial Tribute,” is available for digital download at FishersMusic.com.

Whisman said all of the songs have an Indiana theme. Of the seven songs, four are originals written and composed by the academy’s musicians.

The cover songs include “On the Banks of the Wabash,” “Indiana (Back Home Again)” and the Jackson Five’s “Going Back To Indiana.”

Whisman said he was first inspired to produce the album by another local Fishers business, Vardagen, which creates and prints custom shirt designs. Whisman saw a design Vardagen created for when the Colts played the New England Patriots several years ago.

“I thought that was a really cool thing that a local business did,” Whisman said. “I was talking to my wife and said, ‘What is it that we can produce that would be a fun product like that?’”

Jon Schwier, 36, a professional musician and songwriter and instructor both privately and at the Ji-Eun Lee Music Academy, was involved with the recording process.