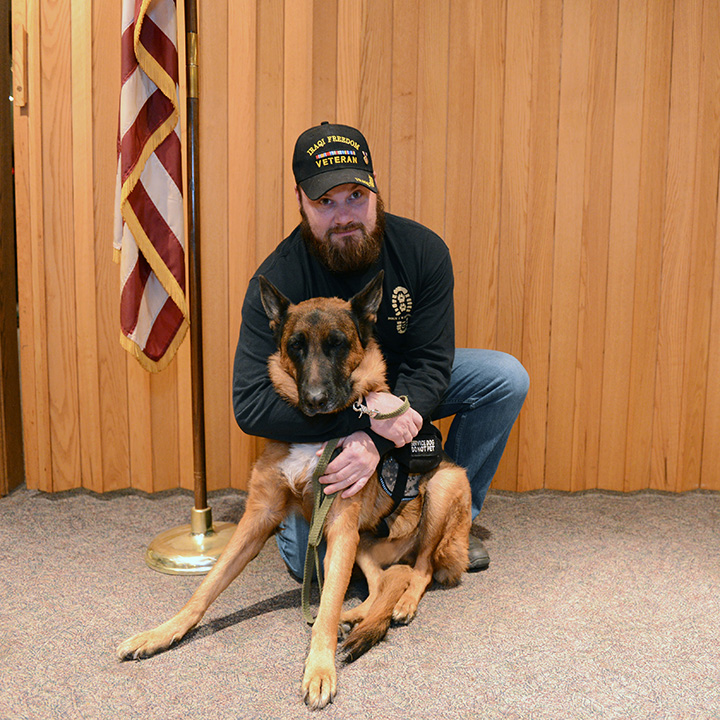 Shane Jackson and his dog, Jersey. (Photo by Theresa Skutt)

That all changed when Jersey came into the Army veteran’s life. Jackson, who was in Iraq in 2006 and 2007, received the German shepherd from Ohio-based Dogs 4 Warriors.

“I’m slowly able to do some of the things I used to do,” Jackson said.

Jackson, from Flint, Mich., helped convince Carmel’s American Legion Riders Post 155 to hold a signature motorcycle ride for Dogs 4 Warriors, which provides service dogs for veterans. The three-hour ride, set to begin at 10 a.m. July 23, costs $25 per rider and $10 per passenger. There will be free food afterward for riders.

“I had PTSD and a brain injury,” Jackson said. “(Jersey) helps with anxiety and depression.”

Jackson said the charitable organization also trains the dog if someone has a physical disability.

“They’re able to open doors, turn lights on and things like that,” Jackson said. “It costs nothing for the veterans. You get a dog and go home.”

Chris Ping, a Carmel resident and American Legion Post 155 member, said at the December meeting a service dog would benefit him.

Ping has his own German shepherd, Tucker, but he knows his dog can’t provide the same comfort as a trained service dog would. Most of the time an existing pet can not be transformed into a service dog.

“If I can’t get him trained to be a service dog, I want to get one myself,” Ping said. “I don’t want to replace my dog. But he’s not able to wake me up from my nightmares or know when I’m anxious. I’ve heard this program is one of the best, period. When you have someone (Jackson) drive five or six hours to talk about it, that speaks volumes.”

Ping was an Army paratrooper and combat medic in Afghanistan, serving two tours from 2005 to 2009. He was injured in an IED explosion and was shot in the lower left side in 2009.

“I thought I could handle the burdens of combat on my own,” Ping said. “When I came home I went downhill pretty quick. You cannot do it by yourself.”

“I guarantee if they had a service dog, it will not happen,” Ping said. “It would cut that number by 60 percent.”

Donations should be made out to American Legion Post 155, memo reading Dogs 4 Warriors.