You are at:Home»Current in Carmel»Carmel Community»Pence VP talk focus of monthly GOP breakfast in Hamilton County 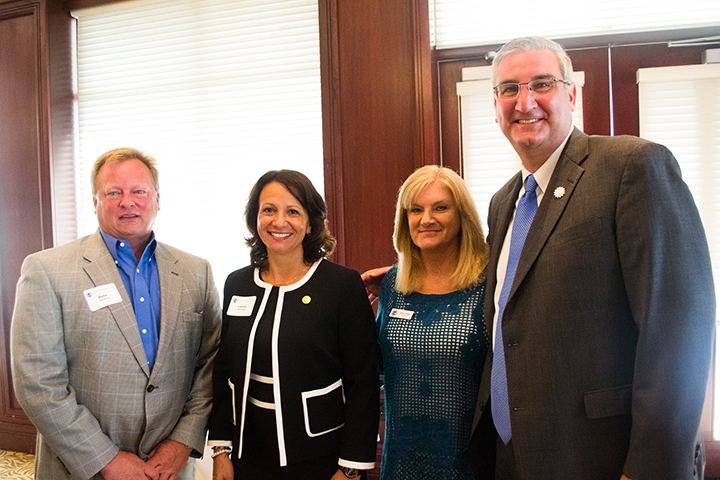 From left, Pete Peterson, Laura Campbell, Kim Good and Eric Holcomb gather at the Bridgewater club after a GOP breakfast July 13. Holcomb was a last-minute guest speaker for the GOP breakfast after he took the place of Gov. Mike Pence. (Photo by Jason Conerly)

It was billed as a big event not to be missed. One day after Gov. Mike Pence was set to appear with presumed presidential nominee Donald Trump, the Indiana governor was schedule to speak at the Hamilton County Republican Party July Breakfast Club on July 13.

The talk in political circles was that Trump was going to name Pence as his running mate on July 12 at the rally at Grand Park in Westfield. And because of the luck of scheduling, Hamilton County would get one of the first looks at the presumed vice presidential nominee. There was even rumors that Pence’s possible replacement to run for governor — Lt. Eric Holcomb, former Gov. Mitch Daniels, Rep. Susan Brooks, Rep. Todd Rokita or Indiana Speaker of the House Brian Bosma — would be in attendance at the breakfast as well. Pence could not run for both vice president and Indiana governor.

None of that happened. Trump hasn’t named his running mate yet, although Pence has a deadline of July 15 to decide for what office he will run so the party can put another name on the ballot if necessary. In addition, the Republican National Convention begins July 18 in Cleveland.

Trump, or his children, met with several possible running mates while in Indianapolis, including former U.S. Speaker of the House Newt Gingrich and U.S. Sen. Jeff Sessions of Alabama. New Jersey Gov. Chris Christie had a meeting at Trump Tower in New York.

With Pence out of town, Holcomb spoke to the crowd instead. He avoided a question about whether he would want to be governor if the chance to run arose, but previously one of his campaign staffers said Holcomb would be prepared and interested. Holcomb praised all of the names floated as possible gubernatorial replacements for Pence on the campaign.

“The next three four months set the future for the next four years of Indiana,” he said. “I’m certain any of the names out there would be excellent choices.”

Pence’s replacement on the trail might have a disadvantage because of a shorter time to mount a campaign than the democratic nominee for governor, John Gregg, former Indiana speaker of the house. Holcomb pointed out that the nominee would have the resources of the current governor’s campaign and that he thinks the voters won’t vote for Gregg’s record. Most polls have given Pence a consistent slight lead since the beginning of the race. Some polls show them virtually tied. Many Gregg supporters have signs that say, “Fire Mike Pence” and emphasize that Gregg “is not Mike Pence.” Holcomb said that could throw a wrench into Gregg’s campaign strategy.

“Gregg has built his entire campaign on an individual, and if it’s not him he’ll have to change that,” Holcomb said.

In other news, Evan Bayh, former two-term U.S. senator and two-term governor of Indiana, has announced he’ll seek to recapture his old senate seat now that former congressman Baron Hill has stepped aside. Bayh decided to not run in 2010 and Dan Coats was elected to his seat but Coats chose not to run for another term. U.S. Rep. Todd Young, the GOP’s choice to run for the senate seat, doesn’t have the campaign cash or name recognition of Bayh, but Young was leading Hill in the polls prior to Bayh’s entrance. Young’s campaign announced July 11 that he had about $1.2 million in the bank on June 30, and Bayh has nearly $9.3 million in his campaign account at the end of March, according to federal reports.

Holcomb said it’ll be a fight for the seat.

“Evan Bayh did his homework and probably has been heavily recruited or else he wouldn’t have done it,” he said. “Probably did polls. Probably did polls to see what tie to wear every morning.”

Laura Campbell, chair of the Hamilton County Republican Party and Pete Peterson, treasurer for the party, both said that a grassroots campaign of volunteers will be key to making sure Hamilton County delivers Republican votes for governor, senate, president and more.