You are at:Home»Current in Zionsville»Zionsville Town Council abstains from removing PUD zoning at Pittman property, The Farm 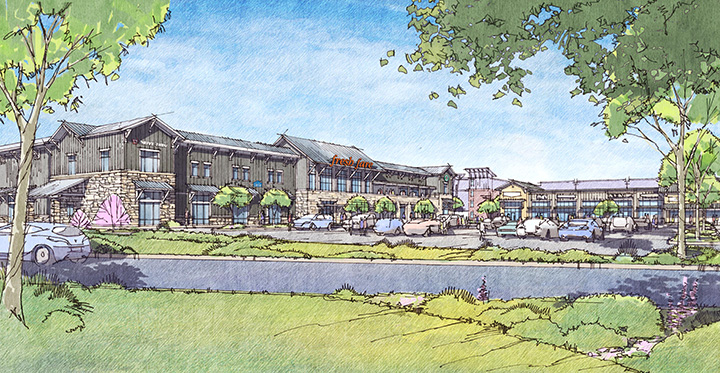 A rendering of the proposed development at The Farm. (Submitted rendering)

The Zionsville Town Council has decided to take no action with a proposal to remove PUD (planned unit development) zoning for the Pittman property development, The Farm, at the southwest corner of Michigan Road and Sycamore Street.

Plans for the stalled, 62-acre, mixed-use development are currently tied up in a legal battle between the owners of the property, five siblings of the Pittman family – Steve, Mark, Chad and Scott Pittman and Anne Kelton – which lead some members of the council to consider stripping the PUD zoning, reverting the property back to its original residential, single-family zoning (R-SF-2), out of fear of the property’s development stakes falling into the hands of developers who may not have the town’s best interest in mind.

But, announced at its July 5 meeting, the council has decided to stay out of it for now.

“In a subsequent meeting of the town council, we addressed this and decided that we were going to postpone any further action due to the legal decisions that have been taken on this particular project,” Town Council President Susana Suarez said at the meeting. “That has made the council realize that there is no further activity needed on this, but we will continue monitoring it to be sure the interest of the town (is considered) first and foremost.”

Plans were originally approved for the development by the Zionsville Plan Commission in September 2015, and Kroger had announced plans to build a grocery store on the property, but those plans have been delayed as the family continues with court proceedings to determine how the $90 million proposed project will proceed.

Steve Pittman previously said the siblings have, so far, been unable to agree on who should develop the property, them or another developer.

Suarez said the rezoning proposal will stay in the council’s old business.