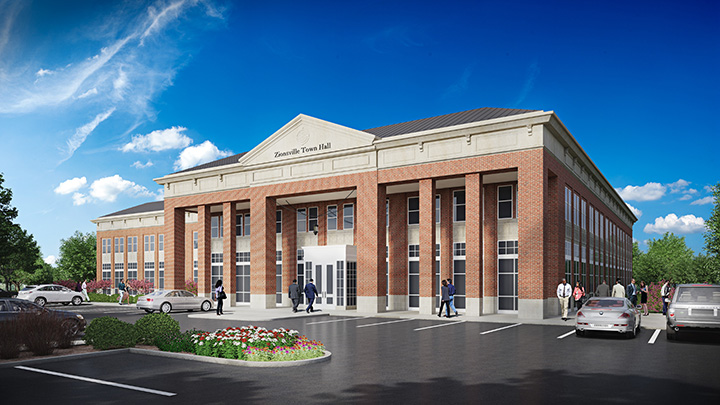 A rendering of the proposed town hall. (Submitted photo)

The Zionsville Town Council has already approved $10.2 million in funding for a new town hall, but now, it is working to set up a separate fund in which payments for the new, 41,300-square-foot building will be paid.

The fund would serve as a holding fund to deposit revenue from other, previously discussed town sources in order to make payments on the loan, acquired through Old National Bank, which the town will pay back over 20 years at a 2.7 percent interest rate.

The fiscal plan for the project, approved March 7 by the council, calls for mostly using monies that will be available to the town in the future but were not included or available in the 2016 budget.

Those sources of revenue previously discussed included using an annual $283,066 in additional County Option Income Tax revenue that was not calculated in the most recent budget, $115,000 from food and beverage taxes, $55,000 from the Cumulative Capital Development Fund and $94,000 in revenues from the Quail Run TIF area, which includes the site of the current town hall that is expected to be torn down and redeveloped into retail. Other funds could come from Boone County TIF revenues.

At the July 5 council meeting, councilor Tom Schuler spoke against the proposal to establish the fund, saying the wording “is stripping the financial authority of (the) council, and saying the mayor can put all the (town’s) revenue in the pot.”

“We did want to leave it broad enough because, at this point, there could be additional sources of revenue that we haven’t anticipated,” Zionsville Town Attorney Heather Willey said. “It is purposely broad. What we’re trying to accomplish is to allow for a line-item fund where anything that would be deposited in that fund would be separately delineated so when you, as councilors, or members of the public, wanted to go back and review those funds, they wouldn’t be co-mingled.”

Schuler continued, saying, “It says that, ‘the town hall shall deposit in the fund any revenue from other town sources.’ I understand why we would want to have a separate fund, but what this does not define is where that money is coming from definitively.”

“I think one important thing that you should keep in mind as well is that any funds that you are going to appropriate have to come back to the council (for approval),” Willey responded.

“It says, ‘take monies from any revenue source,’” Schuler said.

“Yes it does. It absolutely does,” Schuler said. “If you can’t read English, I’m sorry, but that’s what it says right here. If you disagree with me, you’re lying to this community.”

Suarez then made a motion to adopt the ordinance on first reading, which was approved with a 6-1 vote, followed by a 6-1 vote to approve the ordinance. However, Deputy Mayor Ed Mitro reminded the council that because rules had been suspended, the vote had to be unanimous to move to a second reading.

“I would suggest that we visit this issue at our next meeting to discuss whether we need to then address it with an amendment or bring it back to the council to move it on to a second reading,” Suarez said.