You are at:Home»Current in Carmel»Carmel Business Local»Carmel retiree turns music love into biz 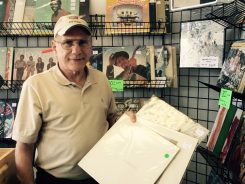 Since he retired a few years ago, Steve Williams had been looking for something to keep him a bit busier.

“It’s difficult to find something you can do on your own schedule,” he said.

Finally, it hit the long-time Carmel resident that he should sell vinyl records.

“I’ve been into music forever, especially country rock,” said Williams, who had his own, small vinyl album collection. “I bought six different collections, three of which were very large.”

Williams, 73, opened Steve’s Stuff, a booth in the Antique Emporium of Carmel, 620 S. Range Line Rd., in May. He also has purchased albums from booth visitors, who have brought in collections.

“The millennials are driving the resurgence of vinyl, and it’s very interesting to me,” said Williams, who sold pre-engineered steel buildings before retiring. “There are people that are strictly collectors. They are looking for unique, first press (albums). I got some of that, but most of my stuff is what I would call playable.”

In 2015, vinyl sales grew 32 percent to $416 million, the highest since 1988, according to the Recording Industry Association of America.

Much of Williams’ collection is made up of Classic Rock, such as The Beatles, Led Zeppelin and Pink Floyd.

“The most difficult thing is grading a record to price it,” said Williams, who is discounting his merchandise 20 percent in July. “There are probably four or five sources that I (use to determine prices).”

Williams said he tries hard to get very clean albums.

“Along with ’70s rock, blues is very desirable at the moment,” said Williams, who has been married for 53 years and has three children.

As a booth operator, Williams doesn’t have to keep regular hours at the Antique Emporium.

Williams also sells supplies, such as protective sleeves, to protect the vinyl records.