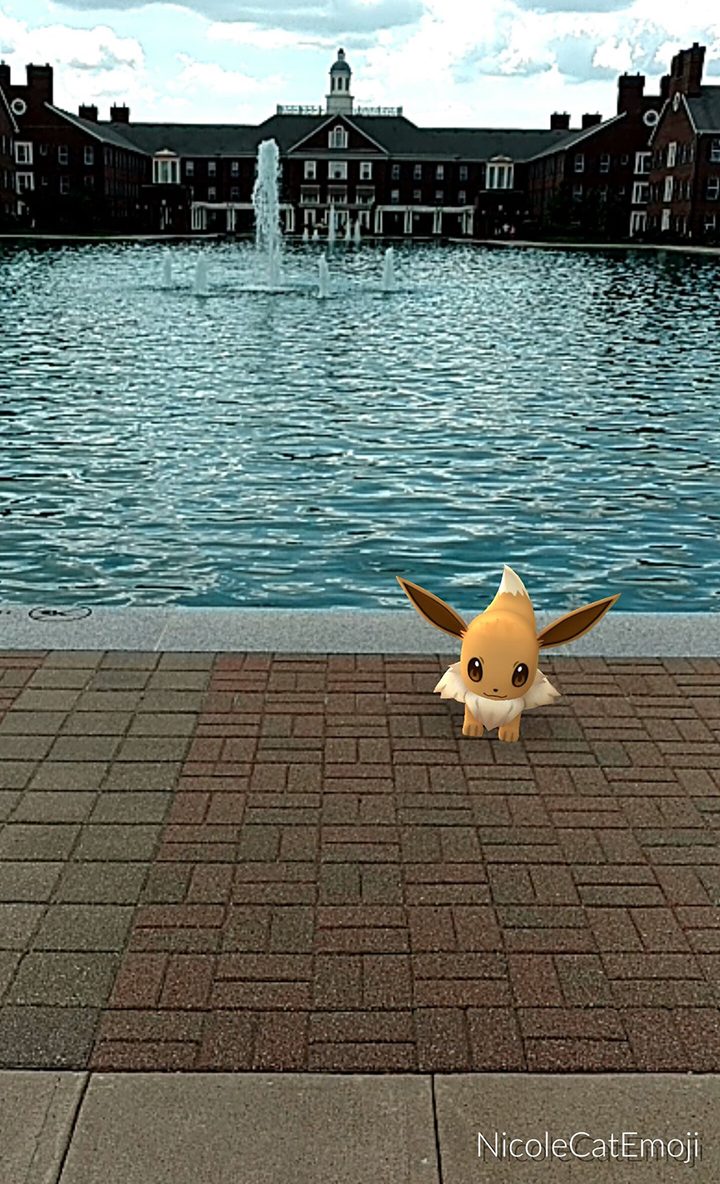 Kristin Chen was using her smartphone parked outside of The Palladium around midnight on a Saturday. Suddenly, flashing red and blue lights from a police car came up behind her. The security officer wanted to know what she was doing hanging outside of Carmel’s concert hall at such a late hour.

“Well…” the 24-year-old said, thinking about how to explain it to the officer. “We’re playing Pokémon. This place is a gym and we have to train our Pokémon here.”

The security officer looked confused. Why play a video game outside The Palladium? He said there was another person out there who seemed suspicious because he wouldn’t say what he was doing outside.

That might be because it’s hard to explain sometimes. Pokémon Go is among the hottest smartphone apps, having launched on July 6 and shooting to the top of download charts. It’s filling Facebook feeds and grabbing national headlines. On the Saturday after its launch, Main Street in Carmel was filled with people — even late at night — walking down the sidewalk, staring at their phones and then pointing it at seemingly nothing.

Pokémon Go is a free game that uses “augmented reality.” It displays a graphic of a Pokémon character on the phone when someone stumbles upon it walking through the city. Players then “capture” it by throwing pokéballs at it, and more of these balls can be found by visiting popular meeting places called Pokéstops, such as businesses, memorials, places of worship, parks and tourist attractions.

Users then can “train” their Pokémon at a “gym.” In Carmel, Pokéstops or gyms can be found at the Monon Community Center, Clay Terrace, the Carmel Arts & Design District (including almost every statue), the Center for the Performing Arts, Carmel City Center, the Carmel Water Tower, Union Brewing Company, Carmel Rotary Plaza and almost every city park.

Some businesses have even capitalized on this increase in foot traffic. Silver in the City, located in the Arts District, had a sign out for customers. Quirky Feather Confectionary has posted screen captures on Instagram to let their customers know what kinds of Pokémon have been found in their shop.

“Gyms” are hotbeds for the digital creatures, and some have reported that businesses may be willing to pay for a “lure module” to help increase foot traffic by attracting Pokémon to a location for 30 minutes.

Carmel resident Nina Johnson said her 12-year-old daughter, Allison, a soon-to-be eighth grader at Creekside Middle School, uses the game to explore new locations. She said Allison and her “video-loving cousin” were inspired to run in the yard just to earn kilometers to catch an egg, so it’s getting kids to move and exercise. While on vacation, Johnson said Allison became a tour guide of sorts, taking the family to unique locations.

“It inspired our afternoon walk to a local library and through a nature preserve so she could earn other Pokemon,” she said. “Then, my daughter announced she wanted us to take a drive to a local landmark that our hosts didn’t even know was in their town. She’s remained responsible about not running into streets or driveways to ‘capture a Pokémon.’ So, for us, this game has encouraged family walks and jaunts to local sites.”

Rachel and Bryan Ferry of Carmel said they recently drove to Iron Mountain, Mich., and they were nice enough to slow down or pull over onto the side of the road so their son Garrett could “catch them all” in some small towns on the way.

Sarah Wallace, a 17-year-old Carmel High School student, said she’s been spending time with her 20-year-old brother Mitchell, wandering Carmel to catch Pokémon. At first, her 56-year-old father, Steve Wallace, made fun of the game, but now she said even he’s addicted to the smartphone app.

“I think it’s fun because it engages the player into the world rather than being inside all day,” Sarah Wallace said. “The game forces the player to leave their home to find Pokemon and to battle in gyms. I found a Pokemon while eating at Bazbeaux’s pizza one day just sitting on the table chilling out. I thought it was funny.”

For parents, that might be the reason they are encouraging their kids to play this game. It’s forcing them to get outside, talk a walk and see new places in the city.