You are at:Home»Current in Carmel»Mamma Mia gelato stand opens 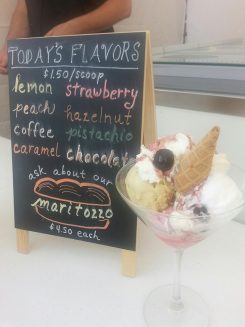 Lucio Romani is bringing an authentic touch of Italy to Carmel with the opening of his gelato stand.

Mamma Mia is attached to his restaurant, Ristorante Roma, 620 Range Line Rd., and the stand faces the Monon Trail. Romani’s restaurant, which opened more than two years ago, is in the Monon Square Shopping Center.

“We make the gelato in the restaurant,” said Romani, a Carmel resident who moved to the U.S. from Italy at age 27 in 1995.

“He took a couple of courses to refresh his techniques in Italy,” Romani said. “If someone wants the real gelato made in Italy, this is the place. The equipment is from Italy. The chocolate and caramel are from an Italian company. Everything but the fresh fruits and the milk is from Italy.”

Gangitano has been training Romani in how to make the gelato.

The stand opened June 16. It will be open seven days a week until early October, and hours are 11 a.m. to 9 p.m., or until it is too dark. Romani is also featuring the gelato at the restaurant.

The gelato is available in cups and cones at the stand with different flavors offered each day.