You are at:Home»Current in Carmel»Carmel shows off city during mayors conference with “Late Night on Main” 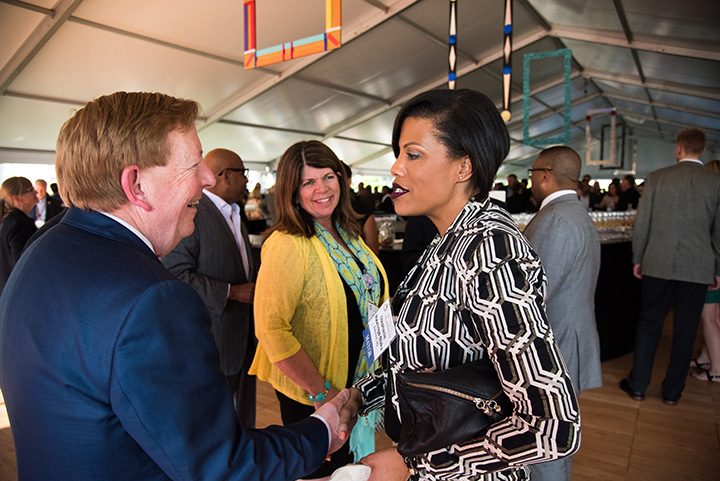 Hundreds of municipal leaders from across the United States enjoyed an evening out in Carmel June 24 as one of the kickoff events for the U.S. Conference of Mayors in Indianapolis.

The event at the JW Marriott hotel, which was held from June 24 to 27, brought many big names to Indianapolis, including the Dalai Lama, Lady Gaga and Hillary Clinton.

Registered attendees, which included mayors, political leaders, business leaders and news reporters, were treated to a private concert at The Palladium by multi-platinum-selling singer Michael Feinstein.

Guests dined on crab legs and shrimp cocktail while watching circus performers in a large tent set up on the center green of the Center for the Performing Arts. A fireworks display lit up the skies around 9 p.m., and guests were shuttled in buses to the Carmel Arts & Design District, where several bands and musical artists performed along Main Street. Part of the street was closed off between First Avenue W and Second Avenue NW, as a cover band played until midnight. Sophia Square hosted a VIP area, and the general public was invited to the arts district for the festivities, with many restaurants and art galleries staying open until midnight.

“It was tremendously successful,” Carmel Mayor Jim Brainard said. “Mayors from all over the United States were in Carmel and saw our redevelopment projects, saw how we use the arts, saw our economic development. A tremendous number of business sponsors from the event were there as well as business leaders who come to conference to meet with mayors to talk about business relocations. National media were there, and we already have some leads on possible business relocations.”

Brainard rearranged his schedule and decided against a trip overseas so he could focus on planning for the event. He said $50,000 was spent from the city’s economic development fund on the event and was approved by the Carmel City Council. In addition, he said Carmel raised more than $400,000 in donations from private businesses for the event. He said approximately 100 people volunteered their time to make the night successful.

“It was a great way to show off Central Indiana,” he said. “It’s good economic development for us.”

New York City Mayor Bill de Blasio, who attended the festivities, made sure to praise the city during his remarks the next day.

“You have shown what a mayor can do to innovate,” he said to Brainard during the speech.

The event was advertised as “Late Night on Main,” and Brainard said it made a long-term and immediate impact on local businesses.

“The short-term economic impact is people walking up and down and buying things,” he said. “One gallery owner told me that they sold more art in one day than they had in weeks, and that was good to hear. Our restaurants were busy and a lot of people from the Midwest tell me they are already planning return visits.”