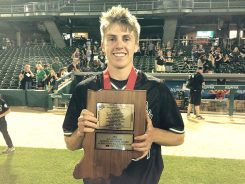 Hurtubise picked up the Indiana High School Athletic Association’s L.V. Phillips Mental Attitude Award for Class 4A baseball following a 3-2 loss to Roncalli in nine innings June 17 in the 4A state championship game at Victory Field.

“On the field and off the field, he’s an impressive kid,” Moore said.

Hurtubise, who has a 3.93 grade point average and was 10th in his 2016 graduating class, accepted an appointment to West Point to play baseball for Army. Indiana Farm Bureau Insurance awarded $1,000 to the general scholarship fund at ZCHS in Hurtubise’s honor.

“It’s a great honor to have, knowing that my classmates, my principal, my coach looked at me as a strong leader with a strong attitude and just a love for the game,” said Hurtubise, who plans to become a pediatrician.

Hurtubise is a member of the National Honor Society, Best Buddies Club, Fellowship of Christian Athletes and the Eagles Making Positive Choices Club.

“We accomplished so much this year,” said Hurtubise, a center fielder who led the Eagles in batting average (.447) and hits (42). “I’m so proud of my teammates, my family. I loved every moment playing with them. It’s heart-breaking. It’s going to take awhile to get over. But life goes on.”

“This stings a little but doesn’t take anything away from the season they had,” Moore said.