I took my own tenderloin tour to highlight a few local Hoosier meals. 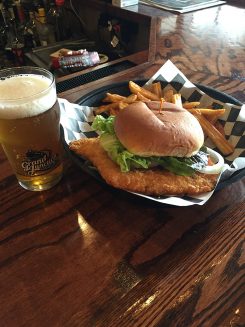 Grand Junction Brewing Co. in Westfield offers the well-known tenderloin that is four times the size of the bun. According to Brandon Bower, a cook at Grand Junction, the tenderloin is local Indiana hog, and it is cut, pound and hand-breaded to order.

“I throw a few spices in there and we use Panko to get the crunch,” Bower said.

Grand Junction suggested its Hoosier Pride Cream Ale be paired with the tenderloin for the perfect Indiana meal. 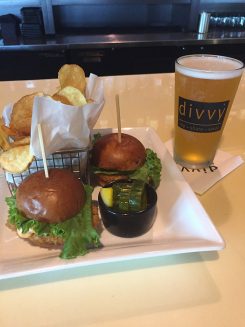 Divvy in Carmel offers tenderloin tasting plates. The Hoosier Minis are served in twos at lunch and in threes at dinner. (Photos by Anna Skinner)

Divvy in Carmel has a variety of small plates, and its take on a pork tenderloin involves two small sandwiches, called Hoosier Minis, for the lunch menu and three for dinner. The tenderloins are topped with a sweet tomato aioli and leaf lettuce. The meal is paired with homemade sweet pickles and kettle chips.

Divvy suggested the tenderloins be paired with Bier Brewery’s Weizengoot.

Alexander’s on the Water, Erika’s Place.