You are at:Home»Current in Carmel»Carmelfest: Chance meeting with guitar legend leads to CarmelFest booking 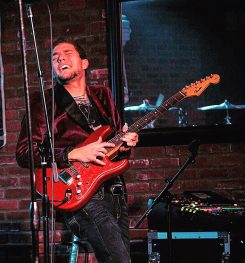 Tommy Baldwin will perform during CarmelFest this year. (Submitted photo)

Tommy Baldwin, a 20-year-old guitar player, said it’s funny how just saying hello to someone can change your life.

A brief introduction to a rock ’n’ roll veteran has now led to recording a full-length album and being scheduled to perform as part of CarmelFest this year.

“A lot of amazing things have been happening,” he said. “It’s an absolute blessing and I would never have thought I’d be in this area.”

Baldwin grew up on the north side of Indianapolis and attended North Central High School. He has grandparents and aunts and uncles who are longtime Carmel residents. He began playing the guitar at 8 years old and has played and rehearsed at Kingston’s Music Showcase in Carmel.

Approximately two years ago, Baldwin traveled to California for a tradeshow centered around guitar, amplifiers and other equipment. As is usual for a trade show, some well-known musicians were in attendance, some of whom were promoting specific guitars.

While his friends waited in line to speak to well-known musical acts, Baldwin saw someone that caught his interest. It was Doug Pinnick, a bass guitar player and singer for a popular 90s band, King’s X.

Pinnick, 65, was influential to rock groups such as Pearl Jam and Alice in Chains.

King’s X was ranked No. 83 on VH1’s 100 Greatest Artists of Hard Rock and they toured with AC/DC, Pearl Jam and Mötley Crüe. They released 12 studio albums and performed at the Woodstock ’94 festival.

Their highest charting song was “It’s Love,” which reached No. 6 on the U.S. rock charts and was released in 1990.

Baldwin just wanted to say hello to a guitar player he respected but quickly hit it off with Pinnick. They began to play together. Eventually, Baldwin was invited to live with Pinnick at his Los Angeles home and record with him in his in-home recording studio. They are currently working on an album together and Baldwin has had a chance to play guitar on a Jimi Hendrix tribute album that Pinnick was involved with.

Baldwin has been invited to perform at CarmelFest on July 3 in GuitarmelFest. He talked to Pinnick, who agreed to fly out and play bass and provide backup vocals for Baldwin’s performance. They’ll be performing songs from the new album.

“It’s an exciting way to release this new music,” he said. “It all happened because I decided to say hello to him. It’s an absolute blessing and it’s all God.”