You are at:Home»Current in Carmel»Carmel Community»Carmel Rotarian honored for humor, service 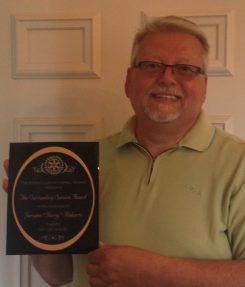 The Rotary Club of Carmel recently chose Jerry Roberts to be its recipient of the Outstanding Carmel Rotarian Award.

“It’s an honor to be chosen by your peers for anything,” Roberts said.

Roberts said he has served as Sargent at Arms during the last 16 rotary club presidents.

“A lot of things I do are connected to rotary,” he said. “With CarmelFest, we do a lot of volunteering.”

Roberts has lived in Carmel for 30 years. He served as a charter member of the Castleton Rotary Club in 1984, and in 1999 he transferred to the Rotary Club of Carmel.

The award is given to club members for their gift of service to the community, and Roberts’ award also recognizes his sense of humor.

Roberts will be recognized in the CarmelFest parade, where he will ride on the Rotary float. He also received a plaque.

“Jerry, a member of the Rotary Club since 1999, has served the club well in a variety of roles,” said Judge Brian Poindexter, president of the club until July 1. “For over a decade, Jerry served as the club’s Sargent At Arms, CarmelFest Kid Zone Volunteer and the club’s Master of Ceremonies.  As the Master of Ceremonies, Jerry excelled beyond all others (and) opened each club meeting or event with a joke or humorous anecdote that could either have the audience rolling on the floor or groaning.”

“Over the years, I’ve done a bit of everything. They must think I’m funny,” Roberts added.

As of July 1, Andrea Rice will be the new Rotary Club of Carmel president.

In addition to his service with the Rotary Club, Roberts works as funeral director at Flanner and Buchanan-Carmel.