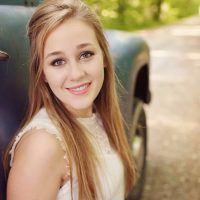 Recent Carmel High School graduate Liza Christie figured it would be extremely difficult for her to make the American Songbook Academy competition.

“Even though three people from my school got in it last year, they are all extremely talented,” Christie said. “I didn’t know if I would be on the same level as them this year. I thought it’s a shot in the dark.”

The shot was right on target as Christie recently learned she was selected to compete among the 40 high school vocalists (grades 9-12) from around the nation.

“I’m over the moon about it,” Christie said. “I’m still kind of in shock that I actually got in.”

“All of these people are so invested in the Great American Songbook that I kind of want to get to know them,” said Christie, who will be attending Belmont University in Nashville this fall to study commercial music.

For her Songbook audition, Christie sent in her renditions of “Autumn Leaves” and “Blue Skies.”

“As I was going through college auditions for IU, Belmont and Butler, I was getting into jazz and got really into the Great American Songbook,” Christie said. “I thought I might as well try, so I sent in my prescreening videos. My teacher’s (Mantock) past with students in Songbook helped developed my interest more.”

Christie was in Accents, CHS all-girls show choir, her final two years at school. Christie has performed in musicals for Civic Theatre’s Youth Artists Program, Christian Youth Theater, Summer Stock Stage and Grace Church. AT CHS, Christie worked on costume crew for “Big” in 2015 and some other plays.