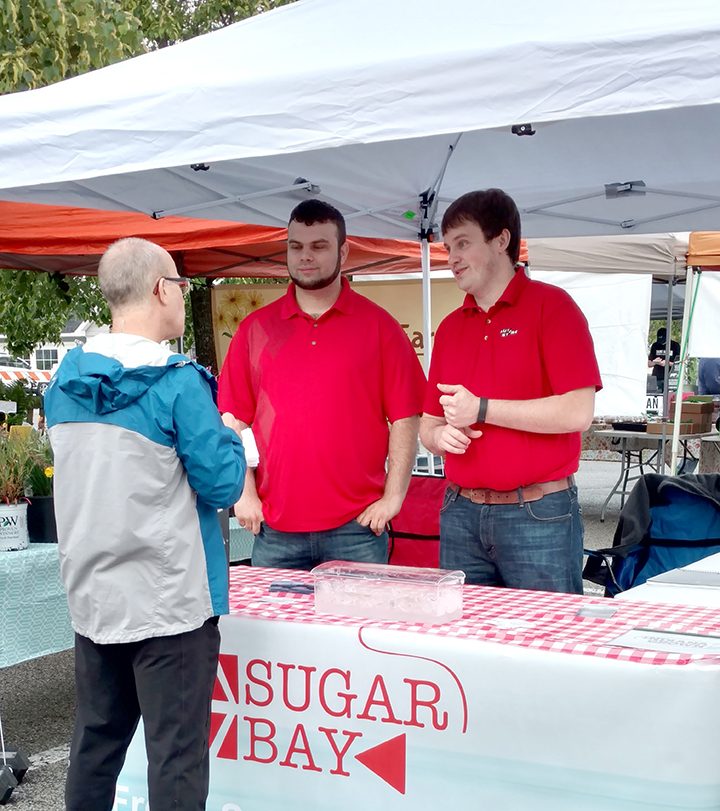 Travis Wright and John Padgett share their story with a customer at the Zionsville Farmer’s Market. (Photo by Heather Lusk)

A new vendor at the Zionsville Farmer’s Market has visitors turning heads and wondering whether fresh saltwater shrimp are truly from Indiana.

John Padgett combined his farming background with an engineering degree from Purdue to create Sugar Bay, the first shrimp farm in Boone County.

“This aquaculture really tailors to both of those things as far as agriculture and mixing it with mechanical engineering,” said Padgett, born and raised on a Thorntown farm.

“It’s a brand new industry, so some of those concepts aren’t really solidified yet,” he said. “There’s a big opportunity to design new ways to raise the shrimp.”

Padgett was studying engineering at Purdue when Indiana-based RDM Aquaculture became the third privately owned shrimp farm in the United States. He was interested in pursuing his own farm after learning more about the environmental impact of shrimp fishing and farming internationally.

Padgett said overfishing in the wild has resulted in dwindling shrimp stock, and traditional shrimp farming can often be detrimental to the environment when shrimp waste is exhausted into the estuaries, causing an excess of nitrogen. The oxygen in the water will become so depleted it kills the fish in the area.

“It’s similar to fertilizer run off that you have from traditional land farming,” he said.

Sugar Bay’s shrimp are raised in indoor, saltwater tanks across three acres with zero runoff into the environment by regulating the water quality. The shrimp are hatched in Miami and shipped to Indiana at eleven days old. Water parameters are measured daily to ensure the health of the Indiana shrimp.

Sugar Bay shrimp will be ready for harvesting in mid-July, but in the meantime Padgett is selling shrimp from RDM at Zionsville, Westfield and Brownsburg farmer’s markets.