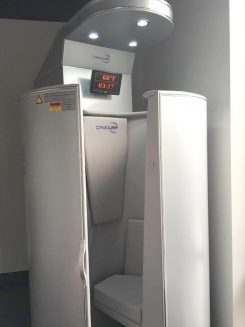 The cryogenic spa involves a process where someone enters a chamber that is filled with liquid nitrogen gas that is as cold as negative 240 degrees. (Submitted photo)

A Better You Wellness, a new business at 4654 Killarney Dr. in Carmel, is offering services such as sensory deprivation float sessions, infrared saunas and a cryo-sauna, where cryogenic cold temperatures help relieve inflammation. The business had its grand opening June 4.

Owner Konnie Komarovsky said he has a background in coaching, and he’s seen how some new innovations in technology have helped athletes heal pretty rapidly.

“It’s a new version of a wellness facility,” he said. “We’re like nothing else in Hamilton County.”

The cryogenic spa is a process where someone enters a chamber that is filled with liquid nitrogen gas that is as cold as negative 240 degrees. The procedure, that lasts two to three minutes, was originally developed for arthritis but now is being used to alleviate swelling or joint pain. Komarovsky said the procedure also helps for tightening of the skin and collagen production.

He said he has one, full-body cryo-sauna, but he also can offer locally administered cryo-therapy for five to eight minutes, and that procedure is more like icing.

He also offers normatec sessions, which are where someone’s arms and legs will be massaged using compressed air for 30 to 60 minutes. He also offers an infrared sauna where a person can relax the muscles with a 30 to 45 session using gentle heat from the full spectrum of infrared light.

Komarovsky also offers float sessions, where someone floats in a chamber in approximately 10 inches of water with 900 pounds of Epsom salt.

“It allows the person to float in a weightless state and once the pressure is not on the body then the blood can flow through the body evenly,” he said.

The water is 93 degrees which is the same temperature as someone’s skin so the user won’t feel anything. They also can’t hear or see anything in the chamber, so there’s a complete deprivation of senses, which can allow the user to meditate and clear one’s mind.

“It’s the most relaxing thing you could do for an hour,” he said.

Sessions cost between $15 and $40, depending on the procedure, but passes are available where people can sign up for a certain number for per month for a discounted cost.