You are at:Home»Current in Carmel»Carmel Business Local»From banana bread to business

For years, Heidi Dilger was known for bringing just the right thing to any gathering, her banana bread. 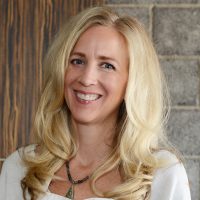 “I would bring it as hostess gifts,” Dilger said. “Friends were requesting it, saying their kids were asking. So I say sure and drop it off. I was just doing it for fun. I like making people happy and it did.”

Over the years, Dilger kept getting pushed by her friends, in particular, Leslie Altavailla. Finally, Altavailla had a friend, who was a graphic designer, create a logo and made some labels saying Heidi Ho’s.

“Over the years we joked about it and talked about names light-heartedly,” Dilger said.

In November, the Carmel resident began selling her banana bread through her website. In addition, she began delivering approximately 40 mini loaves of banana bread to Joe’s Butcher Shop in Carmel on Thursdays.

“I don’t want to get too overwhelmed,” Dilger said. “I’m trying to take it slowly. It’s just me (baking). This happened by accident.”

Dilger said when her friends first made her do it, she thought she’d send an email out to friends about holiday or teacher gifts.

“I just got more requests and I just kind of ran with it,” she said.

Dilger said her husband, Ken, former Indianapolis Colts tight end, has encouraged her to go for it.

“Ken wants me to go big and maybe he can retire,” said Dilger, with a laugh.

Ken, who played seven seasons with the Colts and three with Tampa Bay before retiring in 2004, said he’ll leave the expansion up to his wife.

“Does she want to get bigger? I don’t know,” said Ken, who is now a mortgage vendor. “It’s a lot of work and lot of time on her part. It will be up to her to decide.”

Dilger said she doesn’t want to be so busy she misses her children’s activities. Zach, 13, is seventh grade at Creekside Middle School and Jessica, 16, is a sophomore at Carmel High School.

“It’s a passion for her,” Ken said. “Right now it’s a part-time job for her and she loves it.”

Joe Lazzara, owner of Joe’s Butcher Ship, said traditionally his store has not been able to sell many sweets or desserts, but that has changed.

“With her name and the quality of the product, we’ve sold it quite well,’ Lazzara said. “They’re delicious and that’s what matters. When there is any kind of social media buzz about it, we sell 60 to 90 in a week. She is dedicated to making them work. She’s been great in being a super vendor. Having the Dilger name helps because she can get social media response from the Colts. When she’s been on a local (TV) station showing how she makes them, the sales double and triple.”

Dilger bakes more if needed for Joe’s, but that’s only been a few times. She bakes out of the kitchen in Recess, a restaurant in south Broad Ripple. Recess uses Dilger’s banana bread in various desserts.

Dilger, who started making banana bread as a teenager, said she tweaked the recipe to make it her own.

“There’s something about it that people really liked,” she said.

Dilger, who met Ken at the University of Illinois, worked in commercial market sales for AT&T in Chicago and Indianapolis before devoting time to raising her two children.

“The best thing is working and doing my own thing again, it’s been awhile,” she said. “I think it’s good lesson for my kids that I’ve turned something I love to do into a business.”

Jessica helps puts ribbons and stickers on the banana bread.

For larger orders or business gifting, Dilger takes orders through her email,heidihos@aol.com. Dilger also has a Facebook page under Heidi Ho’s Baked Goods.

1. “Don’t be afraid to go into something you are not familiar with. I know how to bake but did not know anything about the business side of baking. I am learning as I go along!”

2. “From my background in sales, I learned not to be afraid of rejection, and to be persistent and positive.”

3. “If your friends keep telling you that something you do is good, and to make a business out of it — do it!”