You are at:Home»Current in Fishers»Fishers quilter’s work on display 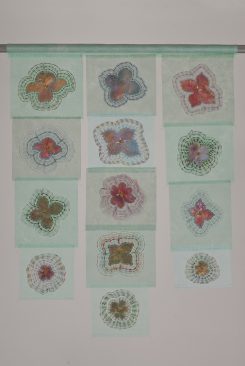 Fishers resident Judy Ireland will be one of 26 artists represented at the “Dialogues: Contemporary Responses to Marie Webster Quilts” exhibit at the Indianapolis Museum of Art. The exhibit is coordinated in conjunction with another IMA exhibit, “A Joy Forever: Marie Webster Quilts.”

Webster was a Hoosier native. She created her first quilt in 1909 and several of her works were later published in Ladies Home Journal. She is considered one the leading designers of early 20th century quilters. Fourteen of the 26 artists in the IMA exhibit are also Hoosiers.

Each of the 26 artists chose a Marie Webster from the exhibit to pay homage.

“We were asked to make a response to a specific quilt in the Marie Webster collection that is on view now,” Ireland said. “We were able to choose the one to which we wanted to respond. I responded to the Dogwood quilt.”

Ireland heard about the call for art through Studio Art Quilt Associates, a group in which she is a member. Art quilting is a form of quilting where traditional and modern techniques are employed to create works of art. Ireland grew up watching her mother sew.

“I began sewing my own clothes and then in the ’70s, quilting started to come back because of the bicentennial of the United States in 1976,” she said. “I decided I’d rather make quilts and learn how to quilt than make my own clothes. It was more fun.”

“A lot of my friendships come from people who do this kind of work,” she said. “It’s my passion and it’s the way I sort of engage and process the world around me.”

The exhibit takes place at the Bret Waller Community Gallery at the IMA, 4000 Michigan Rd., from June 24 to Sept. 4. For more, visit imamuseum.org.