You are at:Home»Current in Carmel»Carmel Community»Carmel native and IU law dean speaks to Rotary Club 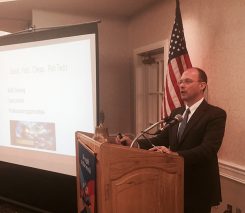 Andrew R. Klein, dean of the IU McKinney School of Law, said he isn’t a fan of lawyer jokes.

Klein, who lives in Carmel and teaches at the law school in Indianapolis, said attorneys should look to heroes like Thurgood Marshall, the first black justice of the U.S. Supreme Court.

“I think it’s important that lawyers convey pride in our profession,” he said. “What it stands for today and what it stood for hundreds of years ago.”

Klein spoke to the Carmel Rotary Club June 3 about the changing world for young lawyers graduating from his law school. He talked about the public perception surrounding lawyers, the rising costs of tuition, and the tough market to find a job as a lawyer.

He said it’s tough nowadays because attorneys need top training and many practices say new lawyers aren’t already courtroom-ready. At the same time, there’s a push by some national leaders to urge law schools to reduce the cost of a law degree and decrease the amount of time it would take to earn the degree.

Klein pointed to one successful program at the IUPUI campus that separates the law school from any other in the state of Indiana.

“We are the only school within a 200-mile radius that invests in a part-time evening program,” he said. “Without that training there are many great attorneys who might not have gotten their degrees. There are many, many people who couldn’t afford to be lawyers without going to work during the day.”

He noted Carmel Judge Brian Poindexter and Nancy Heck, director of community relations and economic development for the City of Carmel, both received their law degrees after attending part-time evening programs.

Klein said it’s difficult for graduates to find jobs because there are more people wanting to get law degrees than there are positions out there. He said the fastest growing fields of law are in intellectual property and healthcare law. But he also said there should be more ways to connect young lawyers with people who don’t always have the means to hire high-priced attorneys.

Klein also noted that the local bar associations have a role in creating great lawyers.

“Great lawyers don’t complete their education or training in three years, and the truth is they never have,” he said. “It requires the mentorship and passion and guidance of the legal community.”

Klein joined the faculty in 2000 and became dean in the summer of 2013. He previously served on the Carmel-Clay School Board for several years.