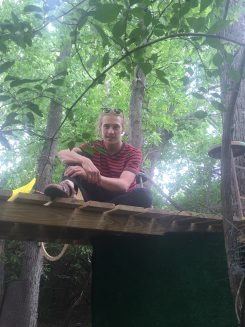 Scott Osborne takes a break in his treehouse at IUPUI. (Photo by Adam Aasen)

Osborne, a Carmel resident and incoming senior at IUPUI’s Herron School of Art, has found the art in carpentry. This sculpture and 3D enthusiast is already working on his senior show. He’s built an expansive tree house in the woods behind a school building, a secret location he doesn’t want to reveal just yet as he keeps adding “found art” pieces to his tree house refuge.

The idea started when he learned about a “sculpture graveyard” behind the building. This was a spot in the woods where art students would discard their failed art projects. Pieces of wood. Wires bent into a shoe sculpture. Plaster heads. Stuffed animals. It looked like garbage and not a quiet place to relax.

“I really wanted to clean this place up and make it somewhere for the community to relax and be in nature and find your creativity,” he said.

Osborne grew up as an athlete, participating in the Carmel Swim Club. It wasn’t until his junior year of high school at Heritage Christian he realized art was something he wanted to pursue. He said he always loved making things with his hands.

“When I was eight years old, I asked for a saw for Christmas,” he said. “I didn’t get it, but I’ve always been interested in how things come together.”

He began working on his tree house project by clearing out the trash and creating a wooden platform as a study base to stand on. He began to add creative elements built out of discarded art projects. A stair entrance made with discarded wooden rings, scraps from another project. A web of wires from USB cables. Metal posts from an old tent frame. A zip line using old rope. 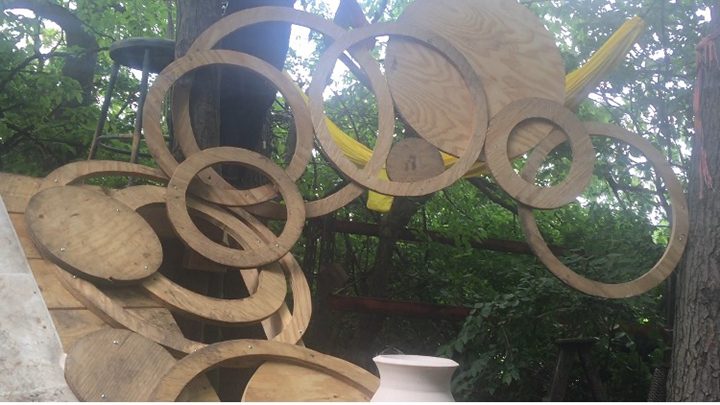 Scott Osborne’s treehouse at IUPUI is made of discarded art projects. (Photo by Adam Aasen)

Throughout the project, Osborne tried to make it aesthetically pleasing by incorporating the number three. Partly because he’s the third child in his family, and also because the number three is a constant theme in art, nature and literature. For example, in photography, a “rule of thirds” is applied for visual quality.

Osborne said he doesn’t know when his senior show will be yet, but that is when the project will be complete and revealed to the public. But he said he hopes even after his show his tree house will be enjoyed by IUPUI students.

“I hope this will live on in the future,” he said. “This is for everybody. It’s a space where you can come and get away from the fumes of the metal shop and relax and be inspired.”