You are at:Home»Current in Carmel»Carmel Community»Back in the Day: Drawing maple sap once common among Carmel farmers 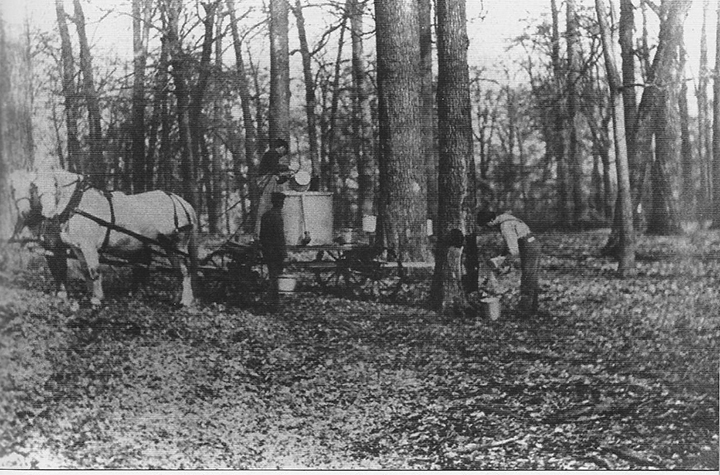 A common activity for farmers in the 19th and early 20th centuries was the drawing of sap.

Sugar camps were once plentiful in the Carmel area because of the abundance of maple trees. The resulting product was then turned into a sweet, thick liquid used as a drink or syrup.

This specialized knowledge dates back to Native American tribes of the northeast United States and southeast Canada, who first introduced French and British settlers to the practice of drawing sap.

Essentially, the practice consists of cutting a V-shape into the trunk of a maple and inserting a reed or tube into the opening. A pot is beneath to catch the dripping sap.

An important aspect of drawing the sap is the weather. Tapping the trees usually starts in late January and lasts until about mid-March. Farms have to wait for the right weather conditions in order to tap the trees. For the sap to run, the nights have to be cold, ideally in the mid-20s. Below freezing, the sap takes too long to warm up the next morning and not flow well. Too warm, the sap does not run either. By late spring, the trees begin to produce leaves and flowers. At that time, a chemical change occurs in the sap, giving it an unpleasant taste.

The last sugar camp in Carmel is believed to have been owned by Wesley Williamson near 116th Street and Gray Road.