You are at:Home»Current in Carmel»Carmel Community»Carmel Police Department to honor police dog June 21

Officer Brian Schmidt, of the Carmel Police Department’s narcotics division, said Leo wasn’t your average dog. He wasn’t just a work partner. And he wasn’t just a pet. He was something more. 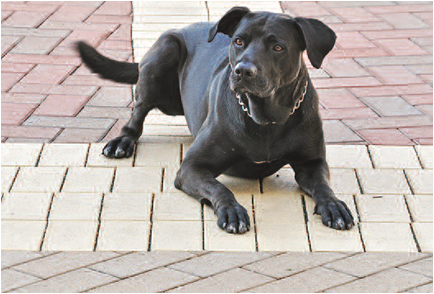 Leo, who was five and half years old, was a mixed breed of English Labrador and Bull Terrier and worked with the CPD for the last four years. He was with Schmidt for all four years. It was his first time working with a K-9 partner and it took Schmidt 12 years to be assigned to one, something he wanted for years. Now that he’s lost his partner, he said it’s tough but he plans on working with another.

“Most of us that work with dogs, that’s all we ever wanted to do,” he said. “So when you lose it, you want another one as soon as possible.”

On June 3, Leo was having a routine surgery to be neutered and during that time it was discovered that he had a large cancerous mass and it was not operable. CPD reported that the mass appeared to be a congenital defect that encompassed several vital areas and there was no treatment that would have allowed Leo to survive this defect. The mass was at risk of bursting and Leo could have faced a painful death and so Schmidt made a tough choice. Leo died that day.

Leo was born in 2010 in Holland and was brought to the United States for police work by Vohne Liche Kennels. He began training to sniff for drugs, missing people and evidence in 2012 and he lived with Schmidt. Leo was good at his job, Schmidt said.

“Once I brought out his harness, he’d go crazy because he’d love to track,” Schmidt said.

Schmidt had worked nights his whole career but was moved to days when he got Leo. Schmidt said Leo actually taught him about community policing because there’s not as much community interaction at night.

Leo wasn’t an apprehension dog, so he didn’t bite, which meant the public could pet him. Often at a scene, Schmidt said there might be a child crying or someone who was upset and Leo could help calm people down since he liked everyone.

“He was very friendly and the public got to have a lot more interaction with him that your usual working dog,” he said. “A search dog was his main focus, but he also by accident became a therapy dog sometimes.”

But when it was time to get to work, Leo was all business, Schmidt said.

“His last seizure in April was a little over 25 pounds of marijuana and a little over $700 in cash,” he said. “That was a pretty good catch here in Carmel.”

The Carmel Police Department will hold a brief ceremony recognizing CPD K-9 Leonidas, his full name, on Tuesday, June 21 at 2:30 p.m. at the Minnie Doane Memorial Gazebo on the lawn of the Carmel City Building.